Dr Peter Kwasniewski with a reflection on how important beauty is to worship. 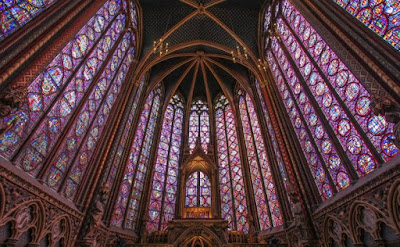 October 30, 2018 (LifeSiteNews) – Was it necessary to change our forms of worship to suit “modern man”? Was it necessary to get rid of our glorious musical heritage and replace it with newly fabricated utility music that mimicked the styles of the secular world? This, after all, was the argument used to justify abolishing Latin, chant, and Renaissance polyphony: all of these are products of other time periods, other cultural contexts; so they are “antiquated” and don’t “speak” to us where we are right now.

But this is evidently false. Many people not only can respond to this music and art, but already love it or find it intriguing and convincing when exposed to it—it’s “authentic.” They love the sound of Latin and chant, the look of Gothic cathedrals, stained glass windows, noble statuary. Witness the ongoing popularity of recordings of medieval and Renaissance music, or art books filled with photographs of the great churches, altarpieces, and tapestries of yore. Such things are perennially appealing to everyone, from the illiterate to the highly educated. All you have to do is watch the looks of amazement and wonder on the faces of so many people who visit Gothic cathedrals in Europe. Majestic beauty still speaks powerfully of the divine, the eternal, the immortal, the spiritual. It is sensuous catechesis, experiential mystagogy. We human beings need it.
It is the purpose of good liturgy and music to train the senses, to habituate people to beauty, to lead them to a higher way of living, thinking, and feeling. We are born as simpletons who can learn to find contentment in far less than our human dignity deserves and is capable of. The old masterpieces are God’s gifts to Christian culture and should serve as the norm used to measure all other contributions. Indeed, it would be exactly backwards to let the tastes of popular culture in its deviation into mass-marketed pseudo-art dictate what Catholics ought to esteem most highly. 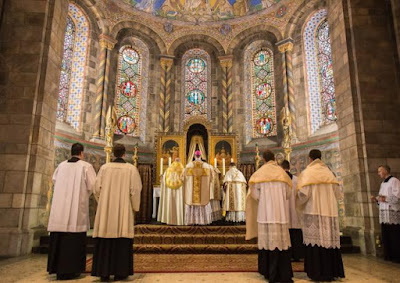 We call masterpieces of art “great” because their value transcends time, even as the Latin language is timeless, a common possession of all nations and the property of no one. To what nation does the Missa Papae Marcelli of Palestrina belong? To what period is the Requiem of Mozart confined? To which social class are the Magnificat fugues of Pachelbel restricted? To what special occasion are the Gregorian properslimited? Foolish questions, all of them! Great sacred music and all great pieces of fine art belong to everyone. They are the inheritance and blessing of all members of the Mystical Body of Christ, the joy of all souls wherever the Catholic Church builds her churches and consecrates her altars. Who would say that the works of Johann Sebastian Bach—such as the Mass in B Minor—are “antiquated” and can no longer move people’s hearts? Bach’s work moves the heart as profoundly as it can be moved.
Those who keep close tabs on the fine arts know that there have always been and continue to be excellent modern pieces of art in all artistic media (as the Catholic Art Guild will be celebrating at its November 4th event in Chicago). In the area of sacred music alone, the repertoire for organists and for choirs is always expanding with worthy new additions. Such works can be effortlessly integrated into the larger panorama of tradition, since they naturally emerge from it and enrich it symbiotically, embodying the same ideals and serving the same purposes. There was never any need for a violent derailment of the past and a slap-dash effort to replace it with products of inferior quality. While great music is immortally youthful, mediocre music embarrassingly shows its age.
All the great religions of the world maintain centuries-old (or even millennia-old) customs of worship, ritual language, artifacts, and music. This is a sobering observation, since it indicates that Catholics alone—or certainly greatly in excess of others—have abandoned their vast artistic and liturgical heritage in favor of a narrow contemporary agenda. Catholicism appears as the religion willing to change its most solemn observances, thus showing that it takes its own traditions least seriously.
If I were not already a Catholic but were searching for the true religion, this massive disconnect between what the Church says it is and how it has acted in the past half-century might have put me off the trail. I would have reasoned: “Orthodox Jews, Eastern Orthodox Christians, High Church Anglicans, Moslems—all of them have clung faithfully and steadfastly to their age-old traditions, have cultivated them and treasured them, and would never give them up. Surely there is abundant wisdom in their attitude, if they believe that they have the truth. But after Vatican II, Catholics threw out what had been considered most sacred and solemn, most beautiful and worthy. I conclude that the Catholic Church hardly knows what it is doing. Folly on such a scale is convincing proof that the spirit of religion, of fidelity and continuity, is not there.”
If this conclusion is unacceptable and false, then so must be the short-sighted, ungrateful behavior towards tradition that supports the inference. The only solution? Cling faithful and steadfastly to age-old traditions. “Thus saith the Lord: Stand ye on the ways, and see and ask for the old paths which is the good way, and walk ye in it: and you shall find refreshment for your souls” (Jer 6:16).
Posted by Jovan-Marya Weismiller, T.O.Carm. at 16:21