The Europe We Want To Look Towards Tomorrow

H/T to Theodore Harvey of Royal World for the information and identifications.

Europe's young royal heirs, with France added. (Luxembourg was presumably omitted in hopes that Her. GD. Guillaume & Stephanie will have children. Luxembourg is currently the only European monarchy without a direct heir under the age of 25. All the others but Liechtenstein have direct heirs born in the 21st century.)
Upper row: Prince George of Cambridge (22 Jul 2013), Infanta Leonor Princess of Asturias (31 Oct 2005), Prince Louis Duke of Burgundy (28 May 2010), Princess Estelle of Sweden (23 Feb 2012), Prince Christian of Denmark (15 Oct 2005).
Lower row: Princess Ingrid of Norway (21 Jan 2004), Her. Prince Jacques of Monaco (10 Dec 2014), Catharina Amalia Princess of Orange (7 Dec 2003), Prince Joseph Wenzel of Liechtenstein (24 May 1995), Princess Elisabeth Duchess of Brabant (25 Oct 2001). 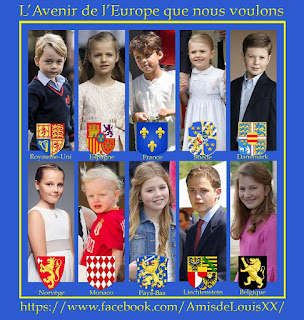 Email ThisBlogThis!Share to TwitterShare to FacebookShare to Pinterest
Labels: Monarchism