I Too Am Worried About the Weaponization of the Rosary

'Give me an army saying the Rosary and I will conquer the world.' -  Pope Pius XI. Maybe that's what the Atlantic is afraid of! Pray the Rosary!!! 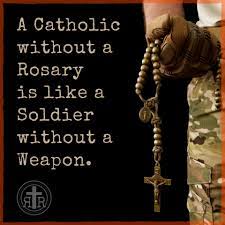 In this time in which Catholic Churches are being vandalized, desecrated, and torched The Atlantic chooses this moment to accuse Catholics of weaponizing the rosary.

The former magazine published a piece titled “How Extremist Gun Culture Co-Opted the Rosary: The AR-15 is a sacred object among Christian nationalists. Now ‘radical-traditional’ Catholics are bringing a sacrament of their own to the movement.”

They even idiotically called the rosary “a sacrament.” Wow. Seriously?

But now that The Atlantic mentions it, I do seem to remember some politician threatening people with rosaries. Do you?

Oh yeah, Biden said, “The next Republican that tells me I’m not religious I’m going to shove my rosary beads down their throat.”

That seems a little worrisome, huh?

So yeah, pro-life clinics are being firebombed but the rosary is the real problem.
Posted by Jovan-Marya Weismiller, T.O.Carm. at 18:51