Today is the Feast of Our Holy Fathers and Patriarchs of Constantinople Alexander (336), John the Faster (577), and Paul the New (784).
✠✠✠✠✠ 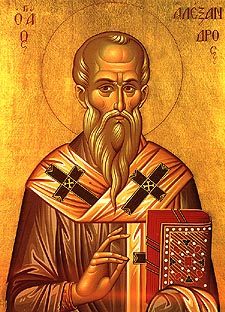 Saints Alexander, John and Paul, Patriarchs of Constantinople, lived at different times, but each of them happened to clash with the activities of heretics who sought to distort the teachings of the Church. Saint Alexander (325-340) was a vicar bishop during the time of Saint Metrophanes (June 4), the first Patriarch of Constantinople.

Because of the patriarch’s extreme age, Alexander substituted for him at the First Ecumenical Synod at Nicea (325). Upon his death, Saint Metrophanes left instructions in his will to elect his vicar to the throne of Constantinople. During these times His Holiness Patriarch Alexander had to contend with the Arians and with pagans. Once, in a dispute with a pagan philosopher the saint said to him, “In the Name of our Lord Jesus Christ I command you to be quiet!” and the pagan suddenly became mute. When he gestured with signs to acknowledge his errors and affirm the correctness of the Christian teaching, then his speech returned to him and he believed in Christ together with many other pagan philosophers. The faithful rejoiced at this, glorifying God Who had given such power to His saint.

The heretic Arius was punished through the prayer of Saint Alexander. Arius had apparently agreed to enter into communion with the Catholics. When the Emperor asked him if he believed as the Fathers of Nicea taught, he placed his hand upon his breast (where he had cunningly concealed beneath his clothes a document with his own false creed written upon it) and said, “This is what I believe!” Saint Constantine (May 21), unaware of the deceitful wickedness of Arius, set a day for receiving him into the Church. All night long Saint Alexander prayed, imploring the Lord not to permit this heretic to be received into communion with the Church.

In the morning, Arius set out triumphantly for the church, surrounded by imperial counsellors and soldiers, but divine judgment overtook him. Stopping to take care of a physical necessity, his bowels burst forth and he perished in his own blood and filth, as did Judas (Acts 1:18).

His Holiness Patriarch Alexander, having toiled much, died in the year 340 at the age of 98. Saint Gregory the Theologian (January 25) mentioned him afterwards in an encomium to the people of Constantinople.

The Service to Saint Alexander was printed in Venice in 1771. According to some ancient manuscripts, Saint Alexander ought to be commemorated on June 2. Today he is remembered together with the holy Patriarchs John the Faster (September 2) and Paul the New (eighth century).
Troparion — Tone 4

O God of our Fathers, / always act with kindness towards us; / take not Your mercy from us, / but guide our lives in peace / through the prayers of the Patriarchs Alexander, John, and Paul.
Troparion — Tone 4
(Podoben: "Go quickly before us...")
Christ, the God over all,1 / has appointed you as a venerable shepherd of His Church, O Godly-wise Alexander, / a light upon the lampstand, a faithful steward, / and the most holy example of a pillar of Orthodoxy. / Therefore, we keep festival in your memory.
✠✠✠✠✠ 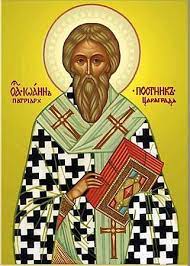 Saint John IV the Faster, Patriarch of Constantinople (582-595), is famed in the Catholic Church as the compiler of a penitential Nomokanon (i.e. rule for penances), which has come down to us in several distinct versions, but their foundation is one and the same. These are instructions for priests on how to hear the confession of secret sins, whether these sins have been committed, or are merely sins of intention.

Ancient Church rules address the manner and duration of public penances which were established for obvious and manifest sinners. But it was necessary to adapt these rules for the secret confession of things which were not evident. Saint John the Faster issued his penitential Nomokanon (or “Canonaria”), so that the confession of secret sins, unknown to the world, bore witness to the good disposition of the sinner and of his conscience in being reconciled to God, and so the saint reduced the penances of the ancient Fathers by half or more.

On the other hand, he set more exactly the character of the penances: severe fasting, the daily performance of a set number of prostrations to the ground, the distribution of alms, etc. The length of penance is determined by the priest. The main purpose of the Nomocanon compiled by the holy Patriarch consists in assigning penances, not simply according to the seriousness of the sins, but according to the degree of repentance and the spiritual state of the person who confesses.

Among the Greeks, and later in the Russian Church, the rules of Saint John the Faster are honoured on a level “with other saintly rules,” and the Nomocanons of his book are accounted “applicable for all the Church.”
The first Slavonic translation was done quite possibly by Saint Methodius, Equal of the Apostles, at the same time as he produced the Nomocanon in 50 Titles of the holy Patriarch John Scholastikos, whose successor on the throne of Constantinople was Saint John the Faster. This ancient translation was preserved in Rus in the “Ustiug Rudder” of the thirteenth century, which was published in 1902.

From the sixteenth century in the Russian Church, the Nomocanon of Saint John the Faster was circulated in another redaction, compiled by the monks and clergy of Mount Athos. In this form, it was repeatedly published at the Kyiv Caves Lavra (in 1620, 1624, and 1629).

Set aflame by the love of Christ, O glorious ones, / you took up the yoke of His precious Cross revealing yourselves as followers in His footsteps by your way of life, / and you became partakers of His divine glory, / divinely-wise Alexander, with wonderful John and glorious Paul. / As you stand before His throne, earnestly pray for our souls.
✠✠✠✠✠ 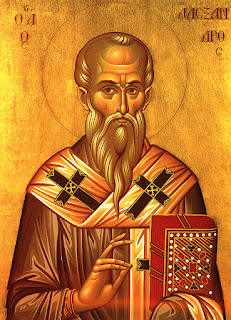 Saint Paul, by birth a Cypriot, became Patriarch of Constantinople (780-784) during the reign of the Iconoclast Emperor Leo IV the Khazar (775-780), and was a virtuous and pious, but timid man. Seeing the martyrdom which Catholics endured for the holy icons, the saint concealed his Catholicism and associated with the iconoclasts.

After the death of the emperor Leo, he wanted to restore icon veneration but was not able to accomplish this, since the iconoclasts were still quite powerful. The saint realized that it was not in his power to guide the flock, and so he left the patriarchal throne and went secretly to the monastery of Saint Florus, where he took the schema.

He repented of his silence and association with the iconoclasts and spoke of the necessity for convening the Seventh Ecumenical Council to condemn the Iconoclast heresy. Upon his advice, Saint Tarasius (February 25) was chosen to the patriarchal throne. At that time, he was a prominent imperial counsellor. The saint died as a schemamonk in the year 804.
Troparion — Tone 4

Set aflame by the love of Christ, O glorious ones, / you took up the yoke of His precious Cross revealing yourselves as followers in His footsteps by your way of life, / and you became partakers of His divine glory, / divinely-wise Alexander, with wonderful John and glorious Paul. / As you stand before His throne, earnestly pray for our souls.
Posted by Jovan-Marya Weismiller, T.O.Carm. at 00:06