Today is the Feast of Our Venerable Father Pimen the Great.
✠✠✠✠✠ 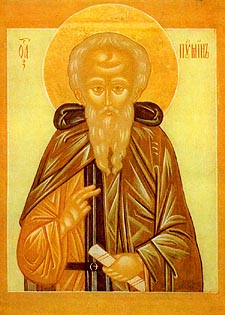 Saint Pimen the Great was born about the year 340 in Egypt. He went to one of the Egyptian monasteries with his two brothers, Anoub and Paisius, and all three received monastic tonsure. The brothers were such strict ascetics that when their mother came to the monastery to see her children, they did not come out to her from their cells. The mother stood there for a long time and wept. Then Saint Pimen said to her through the closed door of the cell, “Do you wish to see us now, or in the future life?” Saint Pimen promised that if she would endure the sorrow of not seeing her children in this life, then surely she would see them in the next. The mother was humbled and returned home.

The fame of Saint Pimen’s deeds and virtues spread throughout the land. Once, the governor of the district wanted to see him. Saint Pimen, shunning fame, thought to himself, “If dignitaries start coming to me and show me respect, then many other people will also start coming to me and disturb my quiet, and I shall be deprived of the grace of humility, which I have acquired only with the help of God.” So he refused to see the governor, asking him not to come.

For many of the monks, Saint Pimen was a spiritual guide and instructor. They wrote down his answers to serve for the edification of others besides themselves. A certain monk asked, “If I see my brother sinning, should I conceal his fault?” The Elder answered, “If we reproach the sins of brothers, then God will reproach our sins. If you see a brother sinning, do not believe your eyes. Know that your own sin is like a beam of wood, but the sin of your brother is like a splinter (Mt. 7:3-5), and then you will not enter into distress or temptation.”

Another monk said to the saint, “I have sinned grievously and I want to spend three years at repentance. Is that enough time?” The Elder replied, “That is a long time.” The monk continued to ask how long the saint wished him to repent. Perhaps only a year? Saint Pimen said, “That is a long time.” The other brethren asked, “Should he repent for forty days?” The Elder answered, “I think that if a man repents from the depths of his heart and has a firm intention not to return to the sin, then God will accept three days of repentance.”

When asked how to get rid of persistent evil thoughts, the saint replied, “This is like a man who has fire on his left side, and a vessel full of water on his right side. If he starts burning from the fire, he takes water from the vessel and extinguishes the fire. The fire represents the evil thoughts placed in the heart of man by the Enemy of our salvation, which can enkindle sinful desires within man like a spark in a hut. The water is the force of prayer which impels a man toward God.”

Saint Pimen was strict in his fasting and sometimes would not partake of food for a week or more. He advised others to eat every day, but without eating their fill. Abba Pimen heard of a certain monk who went for a week without eating but had lost his temper. The saint lamented that the monk was able to fast for an entire week, but was unable to abstain from anger for even a single day.

He also said, “If a man seems to be silent, but his heart condemns others, then he is always speaking. There may be a man who talks all day long, but he is actually silent because he says nothing unprofitable.”

The saint said, “It is useful to observe three things: to fear God, to pray often, and to do good for one’s neighbour.”

“Wickedness never eradicates wickedness. If someone does evil to you, do good to them, and your goodness will conquer their wickedness.”

Once, after Saint Pimen and his disciples arrived at the monastery of Scetis, he learned that the Elder living there was annoyed at his arrival and was also jealous of him because monks were leaving the Elder to see Abba Pimen.

In order to console the hermit, the saint went to him with his brethren, taking food with them as a present. The Elder refused to receive them, however. Then Saint Pimen said, “We shall not depart from here until we are permitted to see the holy Elder.” He remained standing at the door of the cell in the heat. Seeing Saint Pimen’s humility and patience, the Elder received him graciously and said, “Not only is what I have heard about you true, but I see that your works are a hundred times greater.”

He possessed such great humility that he often sighed and said, “I shall be cast down to that place where Satan was cast down!”

Once, a monk from another country came to the saint to receive his guidance. He began to speak about sublime matters difficult to grasp. The saint turned away from him and was silent. They explained to the bewildered monk that the saint did not like to speak of lofty matters. Then the monk began to ask him about the struggle with the passions of the soul. The saint turned to him with a joyful face, “Now you have spoken well, and I will answer.” For a long while, he provided instruction on how one ought to struggle with the passions and conquer them.

Saint Pimen died at age 110, about the year 450. Soon after his death, he was acknowledged as a saint pleasing to God. He was called “the Great” as a sign of his great humility, uprightness, ascetic struggles, and self-denying service to God.
Troparion — Tone 8

By a flood of tears, you made the desert fertile, / and your longing for God brought forth fruits in abundance. / By the radiance of miracles you illumined the whole universe! / Our Father Pimen, pray to Christ God to save our souls!
Kontakion — Tone 4

The memorial of your illustrious struggles / delights the souls of the devout today, / Pimen, our venerable father, wise in God.
Posted by Jovan-Marya Weismiller, T.O.Carm. at 00:06