Eleanor, spouse and consort of Cosimo de Medici, Duke of Florence and Grandi Duke of Tuscany, the model 'First Lady'. 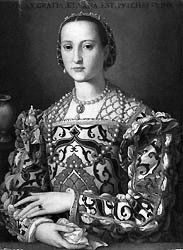 It is probably a debatable point, but Eleanor of Toledo, Duchess consort of Florence, is usually pointed to as a woman who set the standard for “First Ladies” all the way up to the present day. Eleanor was born in 1522 in Alba de Tormes, Salamanca, the second daughter of Don Pedro Alvarez de Toledo, Marquis of Villafranca who was the Viceroy of Naples on behalf of the Holy Roman Emperor Charles V aka King Carlos I of Spain. At the age of seventeen she was married to Cosimo I de’ Medici, Duke of Florence who, in 1569, would become the first Grand Duke of Tuscany. It was an arranged marriage with Eleanor’s father expecting his daughter to gain some of the Medici wealth (which was more apparent than real) and the Medici hoping to gain some status and security by marrying someone highly placed in the Spanish aristocracy and related to the Hapsburg Holy Roman Emperor. With Spain dominating Florence and much of the surrounding area in Italy at that time, being on good terms with the House of Hapsburg was a necessity. Part of the agreement for the marriage was that it would be a show of loyalty to the Hapsburg Emperor sufficient enough to allow for the removal of the Spanish garrison.

However, arranged or not, the marriage was certainly a success as far as what was most required of royal couples; ensuring the survival of the Medici family by producing heirs. There was certainly no problem in securing the succession and Duchess Eleanor gave her husband eleven children between 1540 and 1554, two of whom would succeed their father as Grand Dukes of Tuscany in the future. Given the less than ideal birth status of the previous leaders of the House of Medici, Duke Cosimo was intent to present a new public image of respectability, stability and traditional values. His own large family would be the centerpiece of this new look and Duchess Eleanor was the most important part of it. As far as her public image went, there could not have been a better choice. Not only was Eleanor quite the fertile myrtle, she also had a lovely but reserved appearance which gave the impression of strength and stability to those who saw her. She was also quite religious and a patron of the Society of Jesus, still relatively new at that time. At first the people were inclined to dislike her because of her Spanish origins, and given what so many Italians had been through, that is hardly surprising, but her patronage of the Church, the arts and charitable causes soon won everyone over. 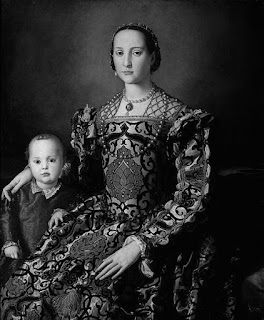 Duchess Eleanor was as conscious as anyone of putting her best face forward and took great care about her appearance, which included sitting for portraits as the prim and proper consort (and later mother of an heir to the throne) as well as wearing lavish gowns. This cannot be dismissed as mere vanity. It was an effort to inspire confidence among the people and visiting dignitaries as to the wealth, stability and power of the Medici monarchy. Nor was it merely an act. Duchess Eleanor was a serious and intelligent lady who ruled Tuscany as regent on behalf of her husband when he was absent. She was also sincerely pious and her devotion to the Church inspired her many acts of charity as well as her donations that allowed for building a number of new churches and her encouragement in bringing the Jesuits into Florence. There was more to her than her public face though and in private she was known for her great (if sometimes low-brow) sense of humor, great personal determination and love for games of chance. And, of course, she was always the perfect hostess, gracious, charming as well as being a close unofficial advisor to her husband in his rule of the duchy and later grand duchy.

Only relatively recently have researchers discovered what a tremendously tough woman Duchess Eleanor was. Studies done on her remains have shown that she suffered from a severe calcium deficiency that must have caused her immense pain. From the results we can surmise that her teeth must have given her a great deal of trouble and that her bones would have caused her incredible agony (she may have even shrank quite a bit over her life). Given all that she was going through, in addition to giving birth to eleven children and still always remaining the ideal consort, public figure, national hostess and even running the government when necessary, Duchess Eleanor emerges as an extremely remarkable woman. Sadly, her life was cut all too short when, at the age of only 40, she died on December 17, 1562 in Pisa during a malaria epidemic that also took the lives of two of her sons.