Today is Holodomor Remembrance Day in honour of all those who fell victim to Stalinist Terror in the Ukrainian Genocide. Somewhere between three and twelve million people died of starvation and diseases brought on by starvation. A large percentage of the victims were Catholics of the Ukrainian Rite. Of course, since the Communists denied there was a famine, accurate records were not kept.
The genocide was well hidden by the Soviets, aided in no small part by the New York Times. The only Western journalist with almost unlimited access to the UkSSR was the NYT's Moscow correspondent, Walter Duranty, who was decorated by the Soviet Government for his rosy reports. Of Duranty, in his memoirs British journalist Malcolm Muggeridge, then a leftist himself and The Manchester Guardian's correspondent in Moscow, talked of Duranty's "persistent lying"  and elsewhere called him "the greatest liar I ever knew.".
Here is a page with some basic facts and links to much more information, HOLODOMOR : The famine-genocide of Ukraine, 1932-1933.
Below is the very first monument in the world to the victims of the Holodomor, in Sir Winston Churchill Square, Edmonton, Alberta.  Each time I walked past it, when I lived in Edmonton, I would pause and say, 'пам’ять Вічна!' (Memory Eternal!) for the souls of Stalin's victims. 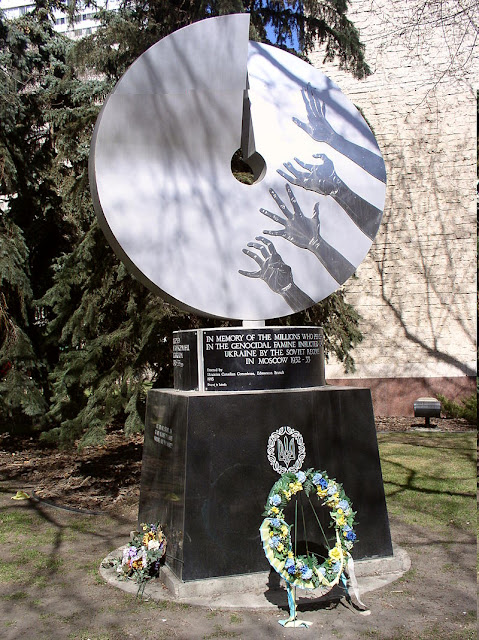 You can see other memorials pictured in this informative Wikipedia article.
Here is a short, animated video from History Matters, 'Collectivisation and the Ukrainian Famine'.
And, here from TimeGhost History, is a longer video, 'The Holodomor - the Communists’ Holocaust'.


The documentary below, 'Harvest of Despair - The 1933 Ukrainian Holodomor Famine Genocide', was made, if I remember correctly, as a co-production of the National Film Board of Canada and Stanford University. When it was finished, it was offered to ABC, CBS, and NBC (the only 'real' networks at the time). They all refused to show it. It was then taken to the publicly funded PBS, who also refused to show it.

William F. Buckley, who had a show on PBS, was then approached. He said that if PBS wouldn't show it as part of network programming, he would show it on his 'Firing Line'. He had a panel discussion after the showing, with the panel including the current Timesman in Moscow, Hedrick Smith. During the discussion, Buckley asked Smith if, given what was now known, the Times was prepared to repudiate Duranty. I was watching it, and I remember that Smith got a sheepish look on his face and said, 'Well, I repudiate him.'

At least, after the fall of the Evil Empire, the Times did have the decency to admit that his articles denying the famine constituted "some of the worst reporting to appear in this newspaper," which is amazing, considering the blatant lies and misinformation the Times has published over the years.

Commentary from YouTube:
"Harvest of Despair" is a documentary on the history and cause of the great man-made famine of 1932 - 1933 in which seven to ten million people starved to death in the Ukraine. It reveals that Joseph Stalin that was mostly responsible by way of his ruthless confiscation of virtually all of the grain harvested in the Ukraine over a two-year period. The Ukraine was and is to this day.., the "Bread Basket" of the Soviet Union !!
This policy of his had several objectives...
By exporting wheat abroad.., Stalin hoped to show the rest of the world that the "Communist experiment" was working, and at the same time, to finance the industrialization of the Soviet Union. He was also determined to destroy the Ukrainian peasantry who resisted the forced collectivization of their lands. These farmers, along with the Ukraine's intellectuals and artists were fiercely "nationalistic" in nature, and wanted their own independence. They were strongly opposed to the Ukraine being "absorbed" into the Union of Soviet Socialist Republics.
"Harvest of Despair" documents this Ukrainian famine using interviews with survivors and scholars to supplement rare photographic evidence. It establishes that this "terror famine" was deliberately created by the Soviet Government as part of Stalin's decades-long effort to destroy the Ukrainian resistance to Communism. Since its original release in 1985, it has received many international awards (including an Academy Award nomination) and has been featured on William F. Buckley's "Firing Line" program on the PBS television. "Harvest of Despair" is a powerful film, which provides a rare insight into one of this century's least-known but most vicious "genocides"...
The Kontakion for the Departed

Give rest, O Christ, to thy servants with thy saints:
where sorrow and pain are no more;
neither sighing but life everlasting.
Thou only art immortal, the creator and maker of man:
and we are mortal formed from the dust of the earth,
and unto earth shall we return:
for so thou didst ordain,
when thou created me saying:
“Dust thou art and unto dust shalt thou return.”
All we go down to the dust;
and weeping o’er the grave we make our song:
Alleluia, alleluia, alleluia.
Пам'ять вічна! - Memory Eternal!
Posted by Jovan-Marya Weismiller, T.O.Carm. at 02:00