Today is the Feasts of the Holy Martyr Paramon and 370 Martyrs in Bithynia, the Holy Martyr Philomenus and Our Father Acacius, of Whom Testimony is Found in the Ladder of Divine Ascent.
✠✠✠✠✠ 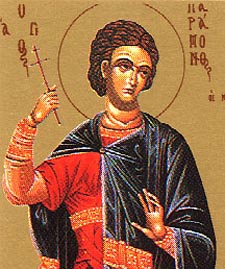 The Holy Martyr Paramon and the 370 Martyrs with him suffered for their faith in Christ in the year 250 during the rule of the emperor Decius (249-251). The governor of the Eastern regions, Aquianus, had locked up 370 Christians in prison, urging them to abjure Christ and instead offer sacrifice to idols.

They subjected the captives to beatings, hoping by torture and the threat of death to persuade them to renounce Christ and worship the pagan gods. One of the local inhabitants, Paramon by name, openly denounced the cruel governor and confessed his faith in the One True God, the Lord Jesus Christ. They beheaded Saint Paramon after fierce tortures, together with the other 370 martyrs.
Troparion — Tone 4

Your holy martyrs Paramon and Philoumenus and those with them, O Lord, / through their sufferings have received incorruptible crowns from You, our God. / For having Your strength, they laid low their adversaries, / and shattered the powerless boldness of demons. / Through their intercessions, save our souls!
Kontakion — Tone 4

Urged on by the commandments of God, / with patience, you cleansed your souls from all defilement. / You reached perfection as spiritual athletes; / you renounced sacrifice to idols. / Imitating Christ, you were slain with a spear, / most blessed Paramon and Philoumenus. / Always fervently intercede with Christ on behalf of the world.
✠✠✠✠✠ 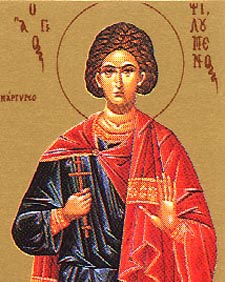 The Holy Martyr Philoumenus suffered for Christ in the year 274, during the persecution against Christians by the emperor Aurelian (270-275). Saint Philomenus was a bread merchant in Ancyra. Envious persons reported to the governor Felix that Philoumenus was a Christian, and so he came before a judge.

Saint Philomenus did not renounce Christ. For this, they hammered nails into his hands, feet and head, and they forced him to walk. The holy martyr bravely endured the torments and he died from loss of blood, giving up his soul to God.
(The Troparion and Kontakion are the same as for St Paramon, above.)
✠✠✠✠✠ 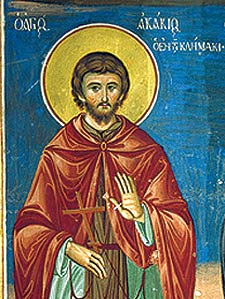 Saint Acacius of Sinai lived during the sixth century and was a novice at a certain monastery in Asia. The humble monk distinguished himself by his patient and unquestioning obedience to his Elder, a harsh and dissolute man. He forced his disciple to toil excessively, starved him with hunger, and beat him without mercy. Despite such treatment, Saint Acacius meekly endured the affliction and thanked God for everything. Saint Acacius died after suffering these torments for nine years.

Five days after Acacius was buried, his Elder told another Elder about the death of his disciple. The second Elder did not believe that the young monk was dead. They went to the grave of Acacius and the second Elder called out: “Brother Acacius, are you dead?” From the grave, a voice replied, “No, Father, how is it possible for an obedient man to die?” The startled Elder of Saint Acacius fell down with tears before the grave, asking forgiveness of his disciple.

After this, he repented, constantly saying to the Fathers, “I have committed murder.” He lived in a cell near the grave of Saint Acacius, and he ended his life in prayer and in meekness. Saint John Climacus (March 30) mentions Saint Acacius in The Ladder (Step 4:110) as an example of endurance and obedience, and of the rewards for these virtues.

By a flood of tears, you made the desert fertile, / and your longing for God brought forth fruits in abundance. / By the radiance of miracles you illumined the whole universe! / O our holy father Acacius, pray to Christ our God to save our souls!
Posted by Jovan-Marya Weismiller, T.O.Carm. at 00:06