MM bemoans the loss of glamour in monarchies, using Monaco as an example. 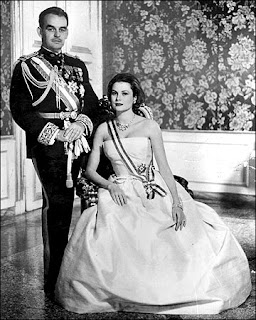 Recently there was another wedding in Monaco. Andrea Casiraghi married his longtime girlfriend, and mother of his son, Tatiana Santo Domingo. It was a relatively small affair, about four hundred guests, strictly private, no photographs allowed and followed by a reception in the gardens behind the palace walls. Of course, no one would expect this to be anything near to as grand a ceremony as the wedding of the Sovereign Prince in 2011. However, there was but a single picture released of the couple and there was no waving from the balcony or anything of the sort. True, it was only a civil wedding and neither of these two young people hold any hereditary titles. As far as the law is concerned, both are simply very well connected commoners. That, however, is part of what I find odd about all this, especially as the magnificent 2011 wedding shows that, when they so desire, the Principality of Monaco still knows how to do things up right. It just seems that Monaco does not care to make such an effort very much these days and in some cases it strikes me as just a bit odd. A case in point being the lack of any hereditary titles for, so far, any of the offspring of the current Princesses of Monaco (save for little Princess Alexandra whose title is derived from her German father rather than her Monegasque mother). 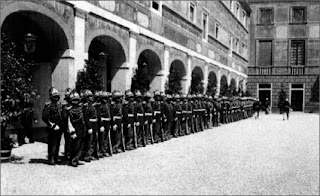 I am not trying to make too much of this because I realize that the entire picture could change in an instant if the Princely Palace were to announce one of these days that HSH Princess Charlene is with child. However, so far that has not been the case and I think people should consider a few facts. Until that day comes, Andrea Casiraghi is second-in-line to the Monegasque throne, behind only his mother HRH Princess Caroline of Hanover. He is second-in-line for the throne and yet has no title. Also, as soon as Andrea and Tatiana were legally married, their baby boy Sasha became legitimized and thus earned a place in the Grimaldi line of succession as well. Now consider that the Princely Palace has never even issued a formal announcement of the birth of this little boy who is just as far from a throne as the much celebrated bouncing baby boy in Britain; HRH Prince George of Cambridge. Both are three steps away from being a reigning monarch and yet little Sasha Casiraghi has no title and was given not so much as a birth announcement. Again, this may because their line of succession will be moved back if and when Prince Albert II does his duty by Princess Charlene. When that happens we may see all of the traditional ceremony; the court announcement, the canon firing at Fort Antoine and all the rest that we saw when Princess Caroline, Prince Albert and Princess Stephanie were born. But, it has not happened yet and we will have to wait and see. 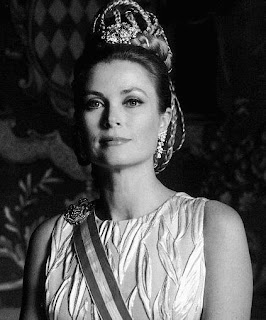 More than that though, I cannot help but have the feeling that little Monaco was just a bit more grand and bit more monarchist in those happy days when Prince Rainier III and Princess Grace were still with us. I have yet to see, for example, an official portrait of the Sovereign Prince in his uniform, standing alongside Princess Charlene in her medals and ribbons (which she was given in 2012) as was the case before. I have also yet to see Princess Charlene appear, even if only for a portrait or formal photograph, in the full splendor of the Grimaldi family jewels. At the Swedish royal wedding in June, for example, Princess Charlene, unlike most of the princesses present, was wearing neither a ribbon nor a tiara nor even a necklace (and if she had on earrings they were too small for me to see). I do not want to come as the ‘fashion police’ here but these things matter, I think, to the overall ‘tone’ that is set in a monarchy. Princess Grace and Prince Rainier certainly did not walk around everyday in all their jewels and medals but they did when the occasion called for it and they had formal portraits taken at fairly regular intervals of themselves in all of their princely finery. I do not think it is totally unrelated that Monaco seemed a bit more glamorous back in those days, at least to me (others will surely disagree). 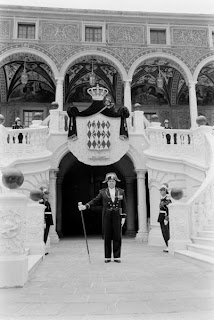 There was also a considerably higher percentage of the family population with hereditary titles in those days. Today, again excepting Princess Alexandra, none of the children of Princess Caroline or Princess Stephanie have any titles. I am sure some will say that such things do not matter at all but, in a monarchy, they certainly do. Surely it must be considered at least slightly peculiar that someone like princely cousin Baroness Elisabeth-Anne de Massy has a title but the third-in-line for the throne does not (and, yes, I realize that not everyone considers the title of Baroness de Massy to be strictly legal but she is called such on the Princely Palace official website in reference to her being godmother to Princess Stephanie so..). Call it a more business-like style, call it more modern but, for myself, I preferred the old days of the medals and ribbons at opera night, the days of liveried footmen and tiaras that we had when Prince Rainier and Princess Grace were still around. It is not a major complaint and in any other monarchy I would probably not make it at all but this is Monaco, where the Princely Family is as secure and beloved as any could possibly be, and I would just prefer to see the Principality ramp up the pomp and splendor just a little bit. That’s my opinion, feel free to state your own.
Posted by Jovan-Marya Weismiller, T.O.Carm. at 00:30