Today is the Feast of Our Venerable Father Alypius the Stylite and the Commemoration of the Blessing of the Church of the Holy GreatMartyr George which is in Kyiv, before the Gates of Holy Wisdom Cathedral.
✠✠✠✠✠ 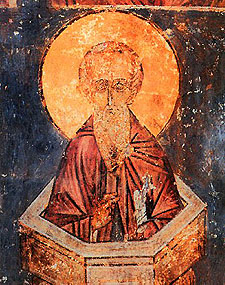 Saint Alypius the Stylite was born in the city of Adrianopolis in Paphlagonia. His mother, a Christian, was widowed early, and she sent her son to be educated by Bishop Theodore. She distributed her substance to the poor, then began to live an ascetic life near the church as a deaconess.

Saint Alypius, from his early years, wanted to devote his life to God and yearned for the solitary life, although Bishop Theodore would not give him permission to do so. Once, when Saint Alypius was accompanying his bishop to Constantinople, the holy Martyr Euphemia (September 16) appeared to him in a vision, summoning Saint Alypius to return to Adrianopolis and found a church in her name.

With contributions offered by believers in Adrianopolis, Saint Alypius did build a church in the name of the holy Martyr Euphemia, on the site of a dilapidated pagan temple infested by legions of devils. Beside the church, under the open sky, the saint erected a pillar over a pagan tomb. For fifty-three years Saint Alypius struggled upon the pillar, praying to God and teaching those who came to him.

The demons which infested the pagan cemetery fell upon the ascetic by night and pelted him with stones. Saint Alypius, wanted nothing to stand in the way of the attacks of the spirits of darkness, then even took down the boards that served him as a roof, protecting him from the rain and wind. In the face of the saint’s conquering steadfastness, the demons forever fled the place, which had been sanctified by his deed of voluntary martyrdom.

Fourteen years before his death, Saint Alypius was no longer able to stand. He was compelled to lie on his side because of the weakness of his legs, and endured grievous sufferings with humble gratitude. Around the saint’s pillar, two monasteries sprang up: a men’s monastery on the one side and a women’s monastery on the other. Saint Alypius introduced strict monastic rules for both monasteries and he directed both monasteries until his death. Saint Alypius reposed in the year 640, at age 118. The body of the venerable stylite was buried in the church he founded in honour of the holy Martyr Euphemia. The relics of the saint of God healed many of those who came in faith.
Troparion — Tone 1

You were a pillar of patient endurance, / having imitated the forefathers, O Venerable One: / Job in suffering, and Joseph in temptations. / You lived like the Bodiless Ones while yet in the flesh, O Alypius, our Father. / Beseech Christ God that our souls may be saved.
Kontakion — Tone 8

The Church glorifies and praises you today, Alypius, / as a perfect example of virtue and the boast of ascetics. / Through your prayers, grant remission of sins to all who venerate your life and your struggles.
✠✠✠✠✠ 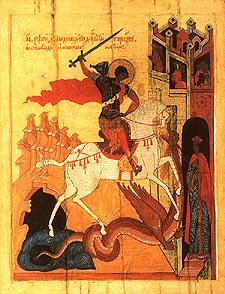 The Consecration of the Church of the Great Martyr George at Kyiv: Beginning with the holy Prince Volodymyr (July 15), it was the pious custom of Russian princes to build a church in honour of their patron saint. Thus, Saint Volodymyr (in Baptism Basil) built at Kyiv and Vyshgorod temples dedicated to Saint Basil the Great (January 1).