'…the final battle between the Lord and the reign of Satan will be about marriage and the family...' - Servant of God Sr Lúcia of Fatima. 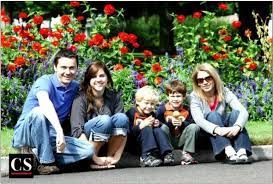 A consulting group’s report to its school board client refers to “systemic familialism.” They use this term to refer negatively to a standard definition of a family unit. Under that definition, a family is a group of two or more people related by birth, marriage or adoption, living together. But that definition supposedly reeks of prejudice or stereotyping. As a result, the consulting firm suggests that intact families (i.e., “systemic familialism”) present a problem for the education system.

The Intact Family Is Not The Problem

The aforementioned consulting firm’s belief that the notion of intact families presents a problem flies in the face of various studies about intact families and their positive impact on children:

A large amount of research has shown that relative to children living in intact families (i.e., the families that include two married biological parents), children living in non-intact families (i.e., the families that are not consisted of two married biological parents) are more likely to exhibit negative psychological and educational outcomes such as poorer academic performance, more risk behaviors, and declined subjective well-being…

The consultants, working for a Michigan school district, believe that some teachers may need reprogramming so they can embrace the struggle against “systemic familialism.” Elsewhere, the firm goes on to suggest that, instead of talking about moms and dads, one should refer to them as “caregivers” or “designated adults.” Who could make this stuff up (other than consultants)?

Statistics Show that Families Already Are In Trouble

Unfortunately, the world, the flesh and the devil are hard at work in an effort to destroy the family. Intact families and marriage have been on the decline for years. For one thing, between 2000 and 2018, the marriage rate in the US fell by about 20%.  In 1968, 85% of US children under 18 lived with two parents. By 2020, this had slipped to 70%. Of those households in 2020, 67% included parents who actually were married, down from 80%+ in the 1960s. In addition, recent statistics show that 40% of all births are to unmarried women.

The World’s Impact on Families

With it’s collective moral values and multiple other challenges, “the world” puts a lot of pressure on families. Economics, concern about diseases, war, and more, cause anxiety for many. And the media keeps the pressure on, seemingly regardless of the facts in some cases. (For example, see a recent Pew survey results showing that over half of journalists don’t believe every side deserves equal coverage in the news.) Consider, as well, what’s trotted out as “family” entertainment on mainstream television, pushing the current woke agenda, and downplaying the importance of the nuclear family. They’re doing their part against families, in the war against “systemic familialisim,” of course.

The Impact of the Flesh on Families

Each of us can look at in the mirror to see how “the flesh” might influence the state of our family. Although we’re created in the image and likeness of God (CCC 357), we don’t always act that way. As a result, we end up distancing ourselves from God and from each other through sin (CCC1849 – 1850). Living for ourselves, taking shortcuts to personal gratification, and ignoring eternal consequences, all serve to damage marriages and families. And this often results in family split-ups and divorces. People keep looking for gratification in all the wrong places, instead of turning to God. Marriage is hard. Without a strong faith foundation, it’s difficult to keep a marriage alive and well. On top of this, stated belief in God continues to trend downward. Given the need for God’s grace to assist in the marriage, this doesn’t bode well for intact families, either.

The Devil and Systemic Familialism

“The devil” has his part to play, as well, in this drama. Readers may recall having read about Sr. Lucia dos Santos’ letter concerning the final battle between the Lord and the devil. Sr. Lucia was one of the three young Fatima visionaries. In a letter to Cardinal Caffarra before her death, she wrote,

…the final battle between the Lord and the reign of Satan will be about marriage and the family...Don’t be afraid, because anyone who works for the sanctity of marriage and the family will always be fought against and opposed in every way, because this is the decisive issue…nevertheless, Our Lady has already crushed its head.(CNA)

The Attack on the Family Is Underway

We currently are witnessing that attack on marriage and the family. It’s playing out in real-time. Just what can an individual do, though? Of course, we can pray. Never underestimate the power of prayer. However, more is required from each of us.

Yes, God allows this craziness in His passive will. Yes, Our Lady has already crushed the head of the serpent. But if we are living in the world, He wants more of us than prayer. He gave us each an intellect, a will, and a reasoning ability. He gave us gifts to use for our sanctification and for building up the Church, including the domestic church.

Through Baptism, we’re each anointed as priest, prophet, and king. Through the prophetic office, we’re called to serve Christ through our engagement in the temporal world. (CCC 905) Similarly, through our office as king, we’re called to leadership in the manner of Christ. Specifically, the laity should work to help change institutions and conditions of the world when they are a cause of sin. (CCC 909, 910) Clearly, we each have a role to fulfill, using the talents and charisms God has given us. Not doing so would seem to be a sin of omission, would it not?

In his Spiritual Exercises, St. Ignatius gives us a method for discerning spirits. We need to be aware, understand, and take action. In addition to personal spiritual discernment,  I believe his advice may be applied in a broad sense to issues like the one mentioned here:

Be aware of what’s happening. Recognize that the example cited here is not an isolated situation. This stuff is far more pervasive than you might think, and it goes beyond “systemic familialism” gobbledygook. Pay attention to what’s going on right now, in your schools, your local and state governments, and elsewhere. Become aware of just what’s actually happening. If you have children in public schools, this is critical.

Understand what’s going on, who the players are, and what their agenda is. Take time to find out what’s being taught and how. Look into who’s on the school board and what they stand for. Get your information from more sources than the mainstream media. Consume “news” wisely, asking what makes sense and what doesn’t. Talk to others, and not just to those with whom you share the same opinion on everything.

Take action to exercise your baptismal roles. Get other like-minded people involved to join in with you. Attend school board, and local government, meetings and make your voices heard. Help get people elected to school boards and local governments that support your values. Run for office yourself. Make it a point to write letters, and get many, many others to do so as well, to let elected officials know your position. Take action now.