'This article was first published last year as a satire, with no thought that it had any prophetic import. But demons, devils and democrats never sleep.' 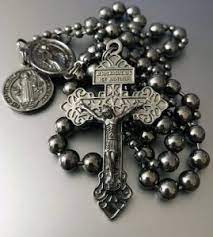 [This article was first published last year as a satire, with no thought that it had any prophetic import. But demons, devils and democrats never sleep. I am working on a new prophecy: Vatican Bans Assault Bibles; Democrats Exalt. The photo above is of a United States government issued “combat rosary” supplied to U.S. soldiers in WW I. They were made of chain and some – the more “deadly” versions –  included a miraculous medal and a St. Benedict medal].

“Our law enforcement personnel and national guard troops have done a fantastic job,” said Virginia Governor Shearing Northcut following this weekend’s raids on homes, churches, and businesses across the state. “In a short 36 hour period, they found and cinfiscated  over 40,000 of the rosary hate weapons. They will all be destroyed.”

Three weeks ago Virginia’s new law banning rosaries went into effect. The typical rosary made of many wood or plastic beads on a cord, rope, or thin wire, with a crucifix attached, is usually not lethal. These are nicknamed “five decade” rosaries or “bump beads.” The law bans these. It also makes it illegal to possess one of the  lethal fifteen decade rosaries, three times as big as the “five decade” versions, some of which the law defines as the lethal “full-hollow-bead” version with enlarged  crucifix, the metal versions called “full metal mamas.”

“Whatever version you have, the five or the fifteen, they are all assault weapons. I have personally seen them both used in numerous crimes,” said one police officer. “Some are used slowly and almost reverently, while some of the criminals appear to be on full-auto, racing through the words.” The officer said this would not matter, “Now with the law in effect, we will get them all.”

One state senator, who asked to remain anonymous, told this reporter, “It just makes common sense. No one needs to say 53 of the same prayer or even 6 of the same prayer, over and over. It is in the interest of all the people that these chains or necklaces or whatever they are be limited by law.”

For many years these weapons of hate have been used at women’s health care centers to intimidate, harass, and assault innocent women and girls trying to enter these places for care.

One fourteen-year old girl said that just the mere sight of one of the five-decade versions caused her to go into a panic attack. She said, “And it was actually worse four hours later when I came out and they were still there, holding those wicked beads in front of me. With that dead body on the cross. Almost made me vomit again when one of those jerks who was kneeling down said ‘the birth of the baby Jesus’.”

The mental anguish was much more severe for a nineteen year old, exercising her constitutional right to infanticide,  whose baby ended up alive after the attempted termination. “Even over the last screams of that kid I could here them  through the window chanting the same hate speech, over and over, clutching those damn beads! There was no warning, no safe space for me. Their chants cut me to the core.”

The new law has insured that such rosary hate crimes will not be committed again in Virginia – and those criminals who are apprehended  will be prosecuted to the full extent of the law.

The Governor noted what had made this all possible. “We have eradicated all this suffering due, in large part, to the generous funding provided in the last election cycle by Jorge Sorrows and Micah Blooming for candidates all over our state, up and down the ballot, top to bottom. We’re talking millions of dollars here. Without that, all the newly-elected caring office holders probably would not have been elected. If that was ‘election interference,’ it was all for the common good, so hats off to them.”

There actually are no hard statistics about how many rosaries there are in Virginia. In one home alone state troopers found over thirty rosaries. “They were everywhere,” said one trooper. “In the TV room, the kitchen, even in the kids’ rooms.”

It was later discovered that the parents were secretly homeschooling the four children, while exposing them to the hate weapons on a daily basis. While law enforcement took the parents to jail, child protective services cared for the children.

“Our luck with these homeschooled kids has not been too good,” said a CPS officer who asked to remain anonymous. “Rehab works with some of them. Electroshock treatment with some. But others simply cannot be  turned from the dark side of this influence.”

Governor Northcut, when asked about the two children, a seven-year old and an eleven-year old who had died during the electroshock therapy, said that, “This was all for the common good. If they could not be re-educated and rehabilitated, they would have been a detriment to the community for the rest of their lives. And there are much better uses for all that money. The brainwashing was so bad, both of them were using their fingers to chant the words of the hate speech as they died. They simply were not healable.”

The Governor had no patience with those who have invoked alleged “constitutional” rights to make possession of the hate weapons and the hate speech legal. “These rights they talk about – right to free speech, exercise of religion, and of assembly – these are not absolute rights. Except for a woman’s right to abortion and her right to infanticide, none of our rights are absolute.” When aksed about the right to self defense, the Governor laughed. “Self defense? There is no legal person to defend.”

Catholic Cardinal Archbishop  Willem Lurew has issued a public statement assuring the governor and law enforcement that all rosaries and images of them have been removed from the exterior of all church buildings in the state and that rosaries will not be used in the celebration of Mass or in other events in the churches. All parishes that previously had the word “rosary” in their names have been changed. “Our Lady of the Rosary” of Wiltondale, for example, has been renamed “Our Lady of the Rainbow.”

The Cardinal Archbishop, in what he called a show of good faith, announced that once the church has overcome its current financial crisis, it will endeavor to make reparations to everyone who has, in the past, been the subject of rosary hate speech or the victim of a rosary hate crime.

Fresh on the heels of the success with the rosary legislation, multiple members of both houses of the Virginia legislature have cosponsored a recently-introduced a bill to make it illegal to use the lower case of the letter “T.”  “Those offensive and hurtful little crosses are everywhere,” said Senator Sheelah Johnson Meadows. “They are a constant source of offense and pain to numerous pagans, followers of Mohammed, Satanists, and iconoclastic Christians.”

Next week we will present the story of the new multi-person “rosary holes” that are being secretly made in houses and buildings all over the state.  Many people are now meeting clandestinely and defying the law, hiding in these holes and saying the rosary.