Today is the Feast Day of the penultimate King of the English. He died childless as the result of a Josephite marriage, plunging England into a succession crisis ending with the Bastard of Falaise conquering England and becoming the first 'King of England'. 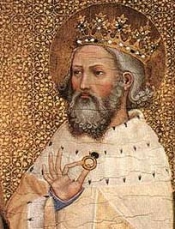 Edward the Confessor was the son of King Ethelred III and his Norman wife, Emma, daughter of Duke Richard I of Normandy. He was born at Islip, England, and sent to Normandy with his mother in the year 1013 when the Danes under Sweyn and his son Canute invaded England.
Canute remained in England and the year after Ethelred's death in 1016, married Emma, who had returned to England, and became King of England. Edward remained in Normandy, was brought up a Norman, and in 1042, on the death of his half-brother, Hardicanute, son of Canute and Emma, and largely through the support of the powerful Earl Godwin, he was acclaimed king of England.

In 1044, he married Godwin's daughter Edith. His reign was a peaceful one characterized by his good rule and remission of odious taxes, but also by the struggle, partly caused by his natural inclination to favor the Normans, between Godwin and his Saxon supporters and the Norman barons, including Robert of Jumieges, whom Edward had brought with him when he returned to England and whom he named Archbishop of Canterbury in 1051.
In the same year, Edward banished Godwin, who took refuge in Flanders but returned the following year with a fleet ready to lead a rebellion. Armed revolt was avoided when the two men met and settled their differences; among them was the Archbishop of Canterbury, which was resolved when Edward replaced Robert with Stigand, and Robert returned to Normandy.
Edward's difficulties continued after Godwin's death in 1053 with Godwin's two sons: Harold who had his eye on the throne since Edward was childless, and Tostig, Earl of Northumbria. Tostig was driven from Northumbria by a revolt in 1065 and banished to Europe by Edward, who named Harold his successor. After this Edward became more interested in religious affairs and built St. Peter's Abbey at Westminster, the site of the present Abbey, where he is buried. His piety gained him the surname "the Confessor".
He died in London on January 5, and he was canonized in 1161 by Pope Alexander III. His feast day is October 13.
Posted by Jovan-Marya Weismiller, T.O.Carm. at 01:00