Intrigue in the Maylasian Kingdoms during WWII. 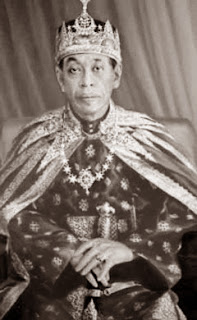 The story of the seventh Sultan of the Malaysian state of Selangor can read slightly differently depending on who is telling the story. This is mostly because of the circumstances surrounding his coming to the throne during World War II and there are some aspects of his life story that are similar to that of Sultan Ali Shah of Terengganu. Both were removed from their place in the line of succession by British colonial officials and both were subsequently placed on the throne of their respective states by the occupying forces of the Empire of Japan. Likewise, both were deposed after the war by the British as being “illegitimate” but in reality it was simply because they cooperated with the Japanese and were seen as “traitors” to the colonial rule of Great Britain. That being said, there were other royals who had friendly relations with Japan and Great Britain as well but in those cases there was either no grounds for their removal that could possibly be found or there were simply no better options for the British to work with. It also happens that, in the case of the Sultan of Selangor as well as the Sultan of Terengganu, the charge of their being “illegitimate” is completely absurd. Each was the legitimate heir who should have come to the throne and, regardless of motivation, in each case it was Britain that violated the royal succession and Japan that set it right again. 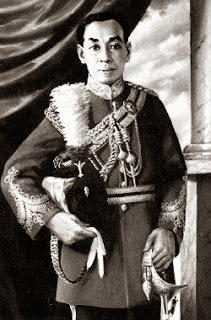 Almarhum Sultan Musa Ghiatuddin Riayat Shah ibni Almarhum Sultan Sir Aladeddin Sulaiman Shah was born Tengku Musa Eddin in 1893 in Jugra, Selangor. He was the eldest son (keep that in mind) of Sultan Alaeddin by his consort Tengku Ampuan Maharum binti Raja Muda Tunku Dziauddin of the royal house of Kedah. He was given the usual private education and had a relatively normal upbringing for his time and place. When he was 27-years old he succeeded his great-great-uncle as the Raja Muda of Selangor in 1920 (in western terms, he officially became crown prince and heir to the throne). A bright and well respected young man at this stage, there were no objections when his father appointed him to represent him on the State Council which the British colonial officials had established in the Malaysian states. However, not long after entering the world of politics, complaints began to surface against the Crown Prince on the part of the British Resident Theodore Samuel Adams. This leading British official suddenly decided that Crown Prince Musa was unworthy of his position and accused him of being wasteful, a gambler and leading an immoral lifestyle. These were, as a matter of fact, the same sort of accusations made against the heir to the throne of Terengganu by British officials and it is certainly no coincidence that, as in that case, Crown Prince Musa was refusing to simply follow British orders and the real “crime” he was guilty of was simply having a mind of his own.

In any event, Malaysia was under British control and so when the British Resident complained about Crown Prince Musa and demanded that he be stripped of his rank as heir to the throne this was done. On July 20, 1936 Crown Prince Musa Eddin was deposed as crown prince and replaced by his half-brother Tengku Alam Shah. The Sultan himself did not just go along willingly with this change, arguing that Musa Eddin was the son he wanted to succeed him as his mother had been of royal birth while the mother of Alam Shah was a commoner and thus, according to long established Malay tradition, the total royal was to take precedence over the half-royal (so to speak). The Sultan took the issue all the way to the Secretary of State for the Colonies in London, about as high up the colonial bureaucracy one could go in the British Empire, but it was all to no avail. Prince Musa Eddin was given a lesser royal title and most thought the issue would be forgotten. In 1938 Sultan Alaeddin passed away and Tengku Alam Shah succeeded him as the Sultan of Selangor with the blessings of Great Britain. Ironically enough, it was Prince Musa Eddin who presided over his coronation ceremony on January 26, 1939 at Istana Mahkota Puri in Klang which must have been an awkward moment. However, to his credit, Prince Musa Eddin performed his royal duty, enthroning his younger half-brother with no hint of any bitterness or ill-will toward him.

That might have been the end of any significant public life for Prince Musa Eddin but for the outbreak of World War II in East Asia. In December of 1941 the first elements of the Japanese Imperial Army crossed into Malaysia and made short work of the unprepared British colonial forces. By early 1942 the Japanese troops under General Tomoyuki Yamashita had driven the British out of Malaysia and captured the strategic fortress-city of Singapore. The entire area came under military rule due to the war situation and Colonel Fujiyama of the Japanese Imperial Army was made military governor of Selangor. The colonel invited the Sultan to Kuala Lumpur to discuss with his superior, Major General Minaki, his outspoken support for the British war effort. The Sultan claimed he had only been following the wishes of the British Resident but, whether this was true or not, it was happily discovered that he should not have been made sultan in the first place. In November of 1943, on Japanese orders, Sultan Hisamuddin Alam Shah surrendered his symbols of office to his elder half brother who officially became Sultan Musa Ghiatuddin Riayat Shah of Selangor. During his subsequent (albeit rather brief) reign there was peace and amity between the Malaysians and Japanese in Selangor. Sultan Musa had attained the position his father had always meant for him to have. Unfortunately for him, it would not last. 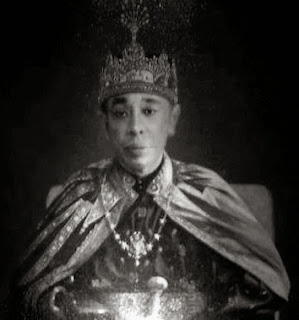 Everyone knows the subsequent history of the end of World War II in the Pacific area. The United States dropped two atomic bombs on Japan, the Soviets invaded Manchuria and the Japanese agreed to an unconditional surrender. The Dutch, French and British colonial regimes in Southeast Asia began to be reestablished and when the British returned to Malaysia there was no doubt that the Sultan of Selangor had to go. His accession to the throne was deemed illegitimate and he was promptly deposed by the colonial authorities, handing the throne back again to his younger half-brother. The former Sultan Musa Eddin was then exiled to the Australian territory of the Cocos Keeling Islands where he spent most of the rest of his life. In 1955 he was allowed to return to his homeland after falling seriously ill and he died only a few months later. His half-brother later served as the King of all Malaysia (and was the one who ended the state of emergency in 1960) and his eldest son is the Sultan of Selangor to this day, having also served as King of Malaysia from 1999-2001.