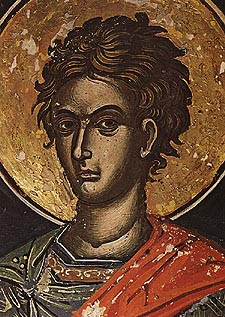 The holy Martyr Nestor was very young in age, handsome in appearance, and he was known to the holy Great Martyr Demetrios (October 26), for he had instructed Nestor in the faith.

The Emperor was visiting Thessaloniki, and he built a high platform in the midst of the city so that a gigantic barbarian named Lyaios could wrestle there and be seen by everyone. Beneath the platform many spears and other sharp weapons were placed pointing upward. When Lyaios defeated his opponents, he threw them down onto the spears and they died. Many Christians were forced to fight Lyaios and were killed. When Nestor saw how Emperor Maximian rejoiced over the victories of his champion, he disdained his pride. Seeing the miracles of Saint Demetrios, however, he took courage and went to the prison where the holy Martyr was confined and fell at his feet.

“Pray for me, O Servant of God Demetrios,” he said, “that by your prayers, God may help me to beat Lyaios, and put an end to him who brings reproach upon the Christians.”

The Saint, after sealing Nestor with the Sign of the Cross, told him that he would prevail over Lyaios, and then suffer for Christ. Nestor mounted the platform without fear and exclaimed: “Help me, O God of Demetrios.” After he defeated Lyaios, he hurled him down onto the spears, where he gave up his wretched soul.

Maximian became enraged and ordered that both Nestor and Demetrios should be put to death. Saint Demetrios was stabbed with spears, and Saint Nestor was beheaded. Thus, by his example, Saint Nestor teaches us that in every human challenge we must say with confidence, “The Lord is my helper, and I will not fear what man shall do to me.” (Psalm 117/118:6, Hebrews 13:6).
Troparion — Tone 5

(Podoben: “Let us the faithful praise...”)
As a friend and companion of Saint Demetrios, / you were an invincible athlete of godliness and contended manfully, O blessed Nestor. / With divine help, you conquered Lyaios, / and by being slain you became a holy sacrifice to our God.
Kontakion — Tone 2

(Podoben: “Thou didst seek the heights...”)
You contested well, therefore you have gained immortal renown, O wise Nestor, / and you became an excellent soldier of the Master Christ, through the prayers of the Martyr Demetrios. / Therefore, with him, pray without ceasing for all of us.
✠✠✠✠✠
Saints Capitolina (Καπιτωλίνη) and Eroteis (Ερωτηίς) lived during the reign of Emperor Diocletian when Zilikinthios (Ζιλικίνθιος) was the magistrate of Cappadocia (ca. 304).

Capitolina was a noble and wealthy lady, but she had no regard for riches. Therefore, she divided all of her property among the poor, and freed her slaves. When she was arrested as a Christian and appeared before Zilikinthios, she confessed her faith in Christ. He ordered her to be thrown into a nearby prison, and she was beheaded the next day.

Eroteis who was Capitolina’s servant picked up some stones and threw them at the magistrate. Outraged, he commanded his guards to beat her mercilessly with sticks. By the grace of Christ, however, the Saint remained unharmed. Then he ordered them to behead her with a sword. In this manner, both of these Saints, the lady and her servant, died by the sword, thereby winning imperishable crowns of glory from Christ.
Troparion — Tone 4

Your holy martyrs Capitolina and Eroteis, O Lord, / through their sufferings have received incorruptible crowns from You, our God. / For having Your strength, they laid low their adversaries, / and shattered the powerless boldness of demons. / Through their intercessions, save our souls!
Posted by Jovan-Marya Weismiller, T.O.Carm. at 00:04