A look at a three-day reign. 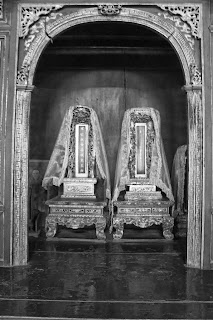 This profile was a rather difficult one to decide to do for the simple reason that the monarch known as Duc Duc was hardly a monarch at all. Amongst the illustrious sovereigns of the Nguyen Dynasty who reigned over Vietnam, his name is not always included as an official emperor. Even his name, Duc Duc, says something about his status as, obviously, he was never given a reigning name or era name as other emperors are commonly known by. However, despite being nominal Emperor of the Great South for a mere three days, Nguyen Duc Duc is often listed amongst the ranks of the Nguyen Dynasty emperors (whether he should be or not) and it is important to understand his story as it gives one a greater insight into the wider history of the last dynasty to reign over Vietnam during the critical period of turmoil and confusion following the death of the great but tragic Emperor Tu Duc. Given that, it is worth taking the time to become familiar with the story of the “3-day king” Duc Duc. He ended up being more significant to history than one would at first assume.

The future fifth Nguyen emperor (if one chooses to count him) was born Nguyen-Phuc Ung Ai sometime in 1852. He was the son of Prince Kien Thoai Vuong, the fourth brother of Emperor Tu Duc. When he was seventeen years old, in keeping with custom, he was renamed Prince Nguyen-Phuc Ung Chan. Under other circumstances his life would have probably been rather uneventful, however, he became much more important due to the fact that Emperor Tu Duc, because of a childhood affliction with smallpox, was unable to have children. In order to secure the succession Emperor Tu Duc decided to adopt the offspring he could not have on his own. However, to be on the safe side, he adopted three of his nephews rather than just one. This secured the succession but also proved to be less than ideal in the long-run. The three he chose were the future emperors Kien Phuc, Dong Khanh and, of course, Duc Duc. Most of the last 60 years of the Nguyen reign over Vietnam would be dominated by the family lines of two of these young princes and, as such, there was some tension between the rival branches of the family. Because of this, the history of Duc Duc can be somewhat confusing with two very different versions being told, one by the allies of his line and the other by its opponents. Obviously, one would portray him in a positive light and the other in a negative light.

According to the pro-Duc Duc line faction, Emperor Tu Duc had always intended for Duc Duc to be the one who immediately succeeded him on the Golden Dragon Throne. Others would dispute this but, just to further complicate matters, Emperor Tu Duc had also chosen three regents to oversee things after he was gone while his nephews were too young to rule. These were Tran Tien Thanh, Nguyen Van Tuong and Ton That Thuyet; who would go on to play a large role in Vietnamese history, particularly Tuong and Thuyet. Others, not of the pro-Duc Duc camp, hold that rather than the elder Duc Duc it was the youngest of the three, Kien Phuc, portrayed as the more upright and virtuous of the youths, whom Tu Duc wished to succeed him. The factions of the other two candidates have left behind accounts which portray Tu Duc as being troubled by the character and untraditional behavior of Duc Duc. Whereas the venerable monarch surrounded himself with priests and scholarly mandarins, Duc Duc, the other factions claim, too often associated with the likes of gamblers, singers, actors and other such entertainers.

Today, these people would be considered celebrities but, in those days, such “celebrities” were seen as being not far above prostitutes and charlatans on the social ladder and not at all the sort of people that proper ladies or gentlemen were to associate with. Nonetheless, we are told that certain highly influential ladies at court, and there were certainly plenty of those behind the walls of the “Dai Noi” (Great Within) in those days, preferred Duc Duc to be emperor. Supposedly, the will of Emperor Tu Duc named Kien Phuc as his preferred successor but these ladies; the powerful Empress-Dowager Tu Du and the consorts Trang Y and Hoc Phi threw their support behind Duc Duc when Emperor Tu Duc died in July of 1883.

For reasons that later became clear (such as an illicit relationship between the lady Hoc Phi and the regent Nguyen Van Tuong) the three regents decided to go ahead with the enthronement of Duc Duc as Emperor of Vietnam. Here, again, we have a bit of history that is disputed which is that, prior to his “coronation” Duc Duc requested that the lines designating Kien Phuc as heir to the throne be struck from the will of Emperor Tu Duc. Loyalists of the line of Duc Duc usually claim that this never happened as Duc Duc was the intended heir to begin with. However, this is the story told by those hostile to Duc Duc and, so it goes, the regents agreed for the sake of stability and unity in the country. However, when Emperor Duc Duc arrived for his formal enthronement with his retinue of unfashionable friends the regent Ton That Thuyet in particular was outraged and publicly read aloud the original will of the late emperor naming Kien Phuc as heir to the throne. Not surprisingly, chaos broke out and the ceremony was suspended pending an investigation into this controversy over the legitimate succession.

The supporters of Duc Duc tell quite a different story, however. According to them, and later revelations suggest that this may well have been the case, Duc Duc was quite upright and was only opposed by the regents because he had discovered their corruption as well as the affair between Tuong and Hoc Phi. In effect, they feared he would put a stop to their gathering of wealth and power if he actually became emperor and so they arranged a battery of false accusations to stop him. Nguyen Duc Duc was only nominally the emperor from July 19 to July 21, 1883 and as his enthronement ceremony was never finished, this is why he is often excluded from lists of the Nguyen dynasty emperors. The idea that he discovered the crimes of the corrupt regents and was kept from the throne for that reason is reinforced by the fact that he was immediately imprisoned, promptly declared guilty of a ridiculously deplorable list of charges and left to die in a slow and excruciating manner out of all proportion to the alleged crimes, even if he had been guilty. The “3-day king” ultimately died, probably from starvation, on October 6, 1883. He was hastily buried, unclothed, in an improper grave. When the loyal and upright mandarin Phan Dinh Phung protested against such outrageous treatment for a member of the dynasty he was banished by regent Thuyet.

However, Duc Duc was not completely forgotten. In 1889 his son came to the throne as Emperor Thanh Thai and early on he began construction of a formal imperial tomb for his late father which, though deteriorated, remains to this day. Emperor Thanh Thai and his son, Emperor Duy Tan, both were deposed by the French before their reigns came to a natural end so when Thanh Thai died his remains were laid to rest in the tomb he had built for his father Duc Duc. The grandson of the “3-day king” was first buried overseas but his remains were eventually allowed by the communist authorities to be returned to Vietnam for a former burial and he was, likewise, laid to rest in the tomb of his grandfather Duc Duc.