The Laity Are Not To Blame for Traditionis Custodes

Ireneaus refutes the accusation that it is 'Toxic Trads' that brought Traditionis Custodes down on our heads. H/T to Vox Cantoris for bringing this to my attention. 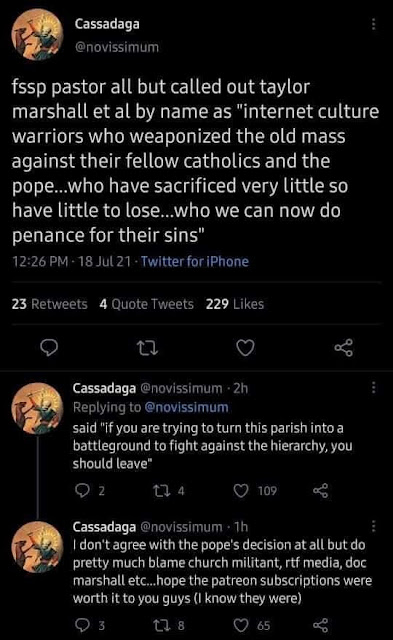 Over the weekend, I noticed this rather odd picture on the Internet. I have no idea who Cassadaga is, but I am going to assume he shared this in a spirit of charity and love.

In the same spirit, let me say a few short and simple words on this.

People like Dr. Taylor Marshall are not to blame for the release of Traditionis Custodes. I have never listened to any of his videos but I am told he is a reasonable and calm man by those who have.

Friends, stop buying into the narrative that "Toxic Trads" - whomever they are - are solely to blame for the actions in the Vatican with respect to the Mass of Ages. It is not true.

It is wrong. It is self-defeating. It plays into the hands of the Enemy to attack one another over mere differences of approach and imperfections, or at least hold them in contempt over imagined wrongs.

This is a pattern I see happen again and again. Year after year. I can cite a number of examples from personal experience, but it is simply absurd to hold a bunch of laypeople hostage in our minds for the actions of clerics in the Vatican which is having international ramifications.

So stop it. It is rather silly to slap on the label "Toxic Trad" onto those you do not like and call it a day. Traditionis Custodes is the result of a decades-long resentment to what the Old Mass represents, of which the current pontiff appears to be the spearhead.

It is about doctrine. It has ALWAYS been about doctrine. In short, the new doctrine feels threatened by the old doctrine and is seeking to stamp it out in the most violent, messiest way possible in what smacks of desperation, rage, and unhappiness. Evil, even.

Let us respond to the actions of those who do not like the old ways by turning to these self-same old ways. We have our Missals. We have our Raccoltas. We have so many tools at our disposal. It is time to make good use out of them and resist the Enemy with a smile of serenity on our face.

God bless you all - and please keep up the good fight, with that same serene smile.