Latin Mass: No Hysteria. A Reply to David Gibson

Dr Shaw responds to a typical liberal whinger who tries to 'prove' that Francis did the right thing in issuing Traditionis Custodes.

From The Chairman's Blog

On a the website of Sapientia, which claims to be 'exploring Faith, Culture, and Society', a film-maker (yes) called David Gibson has written to debunk what he calls the 'hysteria' about Pope Francis' Apostolic Letter Traditionis Custodes.
Here is a brief response to his main points, which he lists as three 'misconceptions':
First, the pope has not prohibited priests from saying Mass in Latin

Unlike under the other points, Gibson is unable to illustrate this with any quotations or links to people saying what he alleges supporters of the Traditional Mass are saying. Perhaps someone should point out to him that these Catholics are actually acutely aware of the difference between 'banning the Traditional Mass' and 'banning the Latin Novus Ordo': rather more sensitive than he is, in fact.

His debunking of what no-one is saying is backed up by an unintentionally amusing quotation:

And how would these Masses be celebrated, Mr Rasmussen, now that the Vatican has stopped printing the Paul VI Missal in Latin? And how much support could such celebrations claim from Pope Francis, who has called this kind of thing, the celebration of the new Mass to bring out its similarities with the old, a form of 'rigidity' and 'clericalism' which is a 'mistake'?
The second misconception, which can be deduced from the brief history above, is that Francis’s decision was the precipitous and peremptory action of a strongman “Peronist” pope,

This is aimed at John Allen in Crux, which is interesting given Allen's stature as a non-ideological journalist and the balanced nature of his article. If Allen thinks Peronism is a useful category, Gibson needs to do more than just quote Michael Sean Winters and, heaven help us, Robert Mickens, in reply.
Winters and Mickens think that Pope Francis is being quite reasonable. But then they would, wouldn't they? If you are going to claim, as Gibson does, that Catholics attached to the old Mass 'brought strife to parishes and dioceses almost everywhere they went', then you need at least one example, I would have thought. 'Almost everywhere'? Really? Is this claim compatible with the 'esteem' accorded this movement, not by its most committed supporters, but by the French Bishops' Conference responding to Traditionis Custodes?
It is the mainstream, the middle ground, which Gibson is trying to debunk here, not some lunatic fringe.

And this is the third and perhaps biggest misconception – that Pope Francis is throttling some burgeoning traditionalist revival
Here Gibson does a better job of illustrating the view he is opposing, quoting Bishop Schneider, Matthew Schmitz, The Economist, and The New York Times. They have all referred to the growing number of Traditional Masses their growing congregations.
Indeed, I have been asked so often by journalists to back up this claim with statistics that I have a handy set which I update from time to time. All you need to do is ask! Gibson, alas, has no relevant data at all. All he can do is point the absolute level of the number celebrations, which obviously cannot tell us anything about the trend. Well, you want a trend? Here it is: from England and Wales, where the Latin Mass Society has been keeping records of Public Traditional Masses for decades. 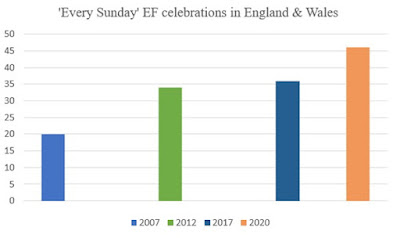 Interestingly, after Summorum Pontificum there was a big surge, and this was followed by a bit of consolidation. But in the last three years the speed of growth has picked up again. Quoting a 2016 article by Mgr Charles Pope, as Gibson does, is not exactly up to the minute news, is it?

As for the question of whether it is attended by young people, which Gibson also questions, this won't be visible in Masses celebrated in a retirement village, but the anecdotal evidence in favour is crushing. I have put together information from the FIUV's world-wide survey in an article in the Homiletic and Pastoral Review.
Gibson is correct that this growth is from a low base, and that the total numbers are still small compared with the number of Novus Ordo celebrations, but it would have to be, wouldn't it? Before 2007 it was extremely difficult to get permission for Masses in most places.
If you want to look at a leading indicator, however, look at the number of ordinations. There is the ever-increasing number of priests being ordained into the Traditional Institutes, organisations with few older priests. And there is the number of priests ordained for dioceses and religious orders who want to celebrate the Old Mass: between a third and half, in many English dioceses. Between them, these processes will ensure that the number of priests wanting to put on celebrations is going to increase enormously as a percentage of the total, since they are replacing priests who have much less interest, and the total number of priests is in rapid decline.
I don't see much evidence of hysteria, Mr Gibson, but plenty of evidence of a strong trend which has attracted the attention of the mainstream press. If you are going to change the conversation, you need facts, not just tweets from Christopher Lamb, to back you up.
Support the Latin Mass Society
Posted by Jovan-Marya Weismiller, T.O.Carm. at 17:40