Our Lady of Izamal

The story of a little known miraculous statue of Our Blessed Mother in southern Mexico. 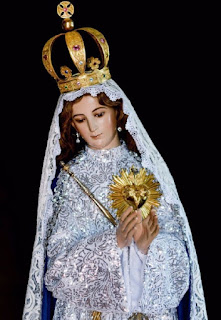 The Yucatan. To winter-wearied North Americans, the name revives images of turquoise seas, powder-white beaches, and ancient Maya ruins. The Yucatan Peninsula is alleged to have one of the richest stores of archaeological ruins in the world and is home to the Maya Indians, the largest indigenous group in North America. The peninsula is comprised of the three states of Campeche, Yucatan, and Quintana Roo.

If tourists can pry themselves away from the beaches, a prime location for the exploration of such ruins would be the town of Izamal, “a jewel of a colonial city” in the heart of the Yucatan Peninsula, 70 miles from Cancun and 45 miles from the state capital, Merida. As fascinating as the ruins, are, however, the “top attraction” of Izamal, according to travel guidebooks, is the “magnificent” Franciscan convent of St. Anthony of Padua which was initiated almost five centuries ago. It was one of the first monasteries in the western hemisphere and became the centre of evangelization for the entire peninsula.

The enormous complex, consisting of church, atrium, and convent, is one of the largest of its kind in America and its atrium (with its seventy-five distinctive arches), is reputed to be the second largest in the world, after St. Peter’s in Rome. The entire edifice is painted a vibrant shade of yellow. The entire town, in fact, is painted in this same colour which is why it is called “The Yellow City” in travel books. “Jewel” indeed! Instead of taxis, the main mode of travel in the town for both locals and tourists are the calesas, the horse-drawn carriages, and, one notes— the horses, also, are decked out in yellow! And the pleasant metronome-like sound, clippity-clop, clippety-clop, clippity-clop, resounds through the tropical town. Cobblestone streets and colonial lampposts complete the idyllic setting.

The convent was built upon the platform of the immense temple, Pap-Hol-Chac, a ceremonial temple dedicated to the pagan god of rain. The town of Izamal had been the headquarters for the worship of their supreme god, Itzamna, and the sun god, Kinich-Kakmo; it had been the centre for the Maya priesthood as well.

Franciscan friar, Fray Diego de Landa, who founded the convent complex in 1549, was named its guardian in 1553. He became the second bishop of Yucatan in 1572. He chose the site, himself, “in order that a place that had been one of abomination and idolatry could become one of sanctity,” thus making holy a place where human sacrifice and idolatry had once been practiced. The pagan pyramid was demolished and its stones were used for the building of the new monastery, thus signifying the sublime triumph of Christianity over paganism. With his own hands he chopped down the trees and hauled stone for the buildings, working alongside the Maya at every turn.

At the heart of the monastery is the church dedicated to Our Lady of Izamal, the principal Marian shrine in the Yucatan. Because Izamal had been the headquarters for the Maya priesthood, the Franciscan friars dedicated the area to the Virgin Mary. According to the secular periodical, Yucatan Today, “Izamal’s people are very devoted to the Immaculate Virgin to this day.” As early as 1519, two years before the Spanish Conquest, Cortez landed on the island of Cozumel in Quintana Roo and erected an image of the “Most Pure Virgin” on the site. Fray Diego de Landa recorded that the first Spanish words the Maya of Cozumel learned were “Maria! Maria! Cortez, Cortez!” Even today you can see signs of this devotion: As soon as you get off the bus at Izamal, the first thing you see is a statue of Our Lady of Izamal—right in front of the bus station!

And one has to wonder: What is the origin of this revered statue? In 1588 Fray Landa travelled to Guatemala, the famed New World centre of religious art, to procure an image of the Blessed Virgin for the monastery at Izamal. He had heard legendary reports of an exquisite statue of Our Lady in the Franciscan church in Guatemala, which had been created by the renowned Franciscan sculptor, Fray Juan de Aguirre. He wanted one just like it for his monastery! To Fray Landa’s great delight, Fray Juan was still alive and flourishing, although advanced in years. The sculptor took on the charge with gusto and within a short time, the 46” tall statue, dedicated to the Immaculate Conception, was completed.

The return journey from Guatemala began to manifest Our Lady’s special predilection for her children of the Yucatan: as the caravan processed through the town of Valladolid a group of Spaniards—struck by the beauty of the statue—demanded that the statue be retained in their town. “It’s too lovely to be relegated to an Indian pueblo!” they decided. “Hand it over!” they bellowed. The Maya refused. At this juncture in the debate a group of the sturdiest of the Spanish men amassed together and said, “Move over! It’s ours now!” And then a miracle happened: The box containing the statue refused to budge! It became so impossibly heavy that twelve men could not lift it an inch off the ground. After much exertion and humiliation, the Spaniards realized that Our Lady’s intention was to remain with her beloved Maya people. Historians recounted another miracle on this journey: Although it rained frequently on the trip “the area about the bearers and their cargo always remained dry.” And in this way the group continued blissfully on its way to Izamal.

Perhaps the greatest miracles associated with Our Lady of Izamal occurred in the ensuing years, miracles which are most pertinent to us now as we face the COVID-19 pandemic. The Yucatan had had its share of lethal plagues: In August 1648 a great epidemic, “a horrible peste” roared across the Yucatan peninsula. In this crisis the Maya turned to Our Lady of Izamal, consecrating the province to her as their special patroness “against epidemics, illnesses, and public calamities.” That the plague abated quickly was attributed to the direct intercession of Our Lady.

Toward the end of the 17th century “another plague raged so fiercely that it was feared that the town of Campeche would have to be abandoned.” Those who were able, fled to Merida, but “within a month it too was one vast hospital of dead and dying.” In this “extremity” the Meridians begged the Franciscan Provincial to bring the statue of Our Lady of Izamal to the capital for a solemn novena of prayer. In a short time the plague disappeared from the city. A similar plague struck the city again in 1730 and once again Our Lady of Izamal came to their aid.

Many honours have been bestowed on Our Lady of Izamal: in 1949 she was not only crowned by the authorization of Pope Pius Xll but she was also declared the Reina, the Queen of the Yucatan. In 1970 she was named the Patrona of the Archdiocese. Her greatest honour came when St. Pope John Paul ll  visited her shrine in 1993 and crowned her a second time. She may be the only statue in the western world to be crowned twice. By the authorization of two pontiffs!

As the world seeks to overcome our own modern-day pandemic, let us turn to Our Lady of Izamal. She is experienced in these matters. And will know exactly what to do.