Big Tech censorship strikes again. Anything that does not support the Left Wing narrative must be suppressed!

From Reclaim the Net

The video was up for almost a year.

YouTube has removed conservative columnist and author Michelle Malkin’s months’ old interview with two Colorado activists who are fighting against S.B. 163 – a Colorado bill that sets an “immunization rate goal” of 95% for every school and requires exemption data to be submitted to the state’s “immunization tracking system.”

The interviewees, Colorado lawyer and medical freedom advocate Robyn Charon and certified patient advocate and parent activist Holly Calvert, both expressed their concerns about the bill during the interview.

“This bill is actually about data tracking,” Calvert said during the interview. “They want our kids’ names, information, addresses, phone numbers so that they can harass us with our own tax money. They can say ‘OK, your kid is missing one vaccine. We are gonna send you letters over and over, phone calls over and over, trying to get you to do it.’ So it’s about pressure and coercion.”

Despite being posted almost a year ago in June 2020, YouTube recently took down the video for violating its “medical misinformation” policy and cited its rule prohibiting “claims about COVID-19 vaccinations that contradict expert consensus from the World Health Organization (WHO).” 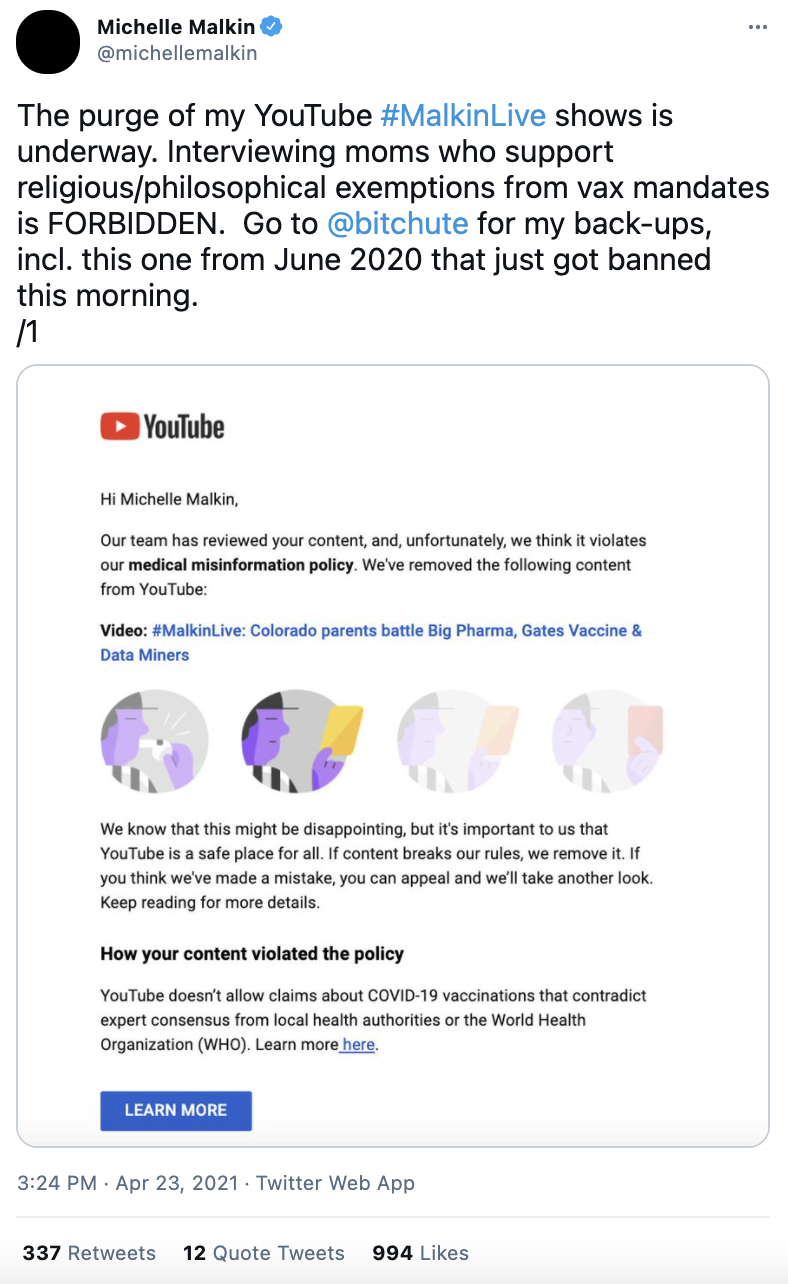 Malkin responded to the takedown of the video by tweeting: “The purge of my YouTube #MalkinLive shows is underway. Interviewing moms who support religious/philosophical exemptions from vax mandates is FORBIDDEN.”

She also urged viewers to watch the backups of this interview and her other videos on the free speech video sharing platform BitChute.

“One warning, one strike issued by the gatekeepers,” Malkin added. “Banned from posting for a week. Can’t even upload pickleball videos. Deplatforming is imminent.” 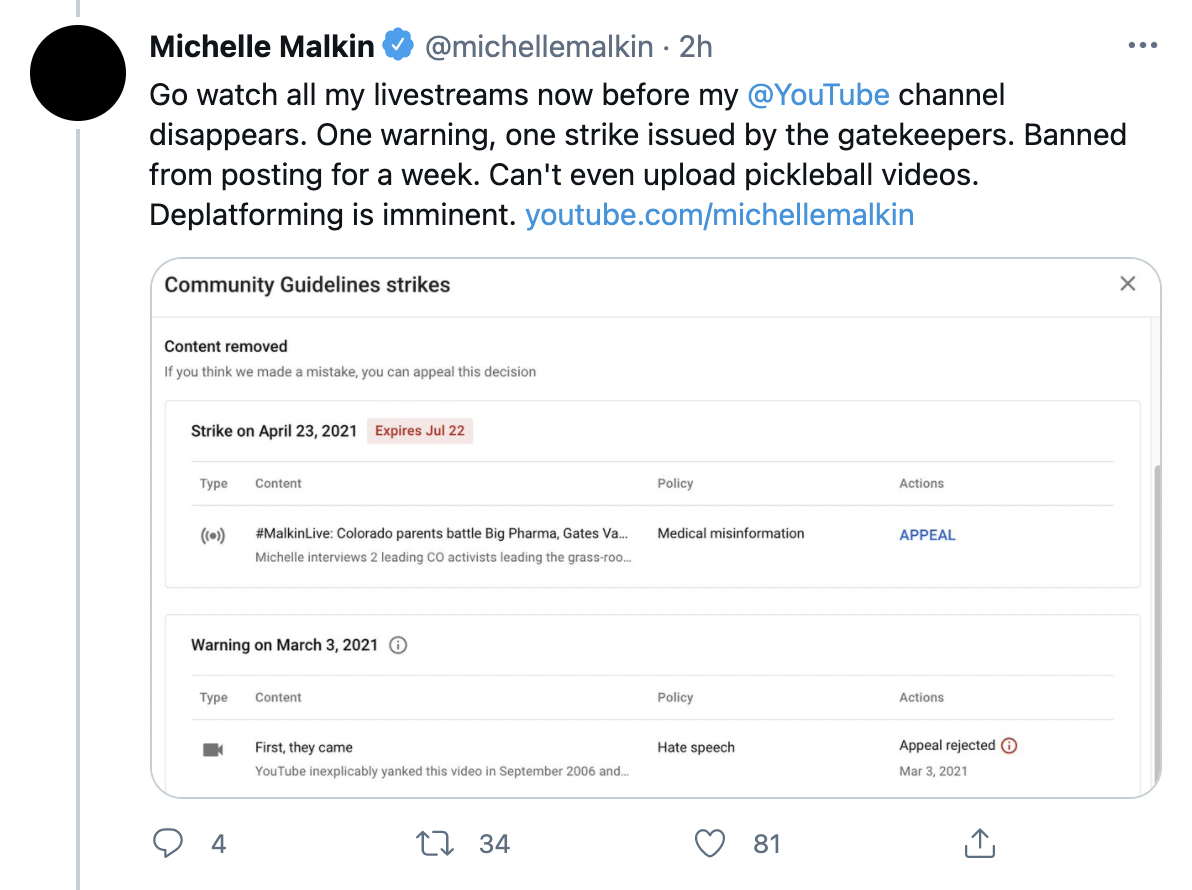 Malkin has appealed the strike but the appeal was swiftly rejected. 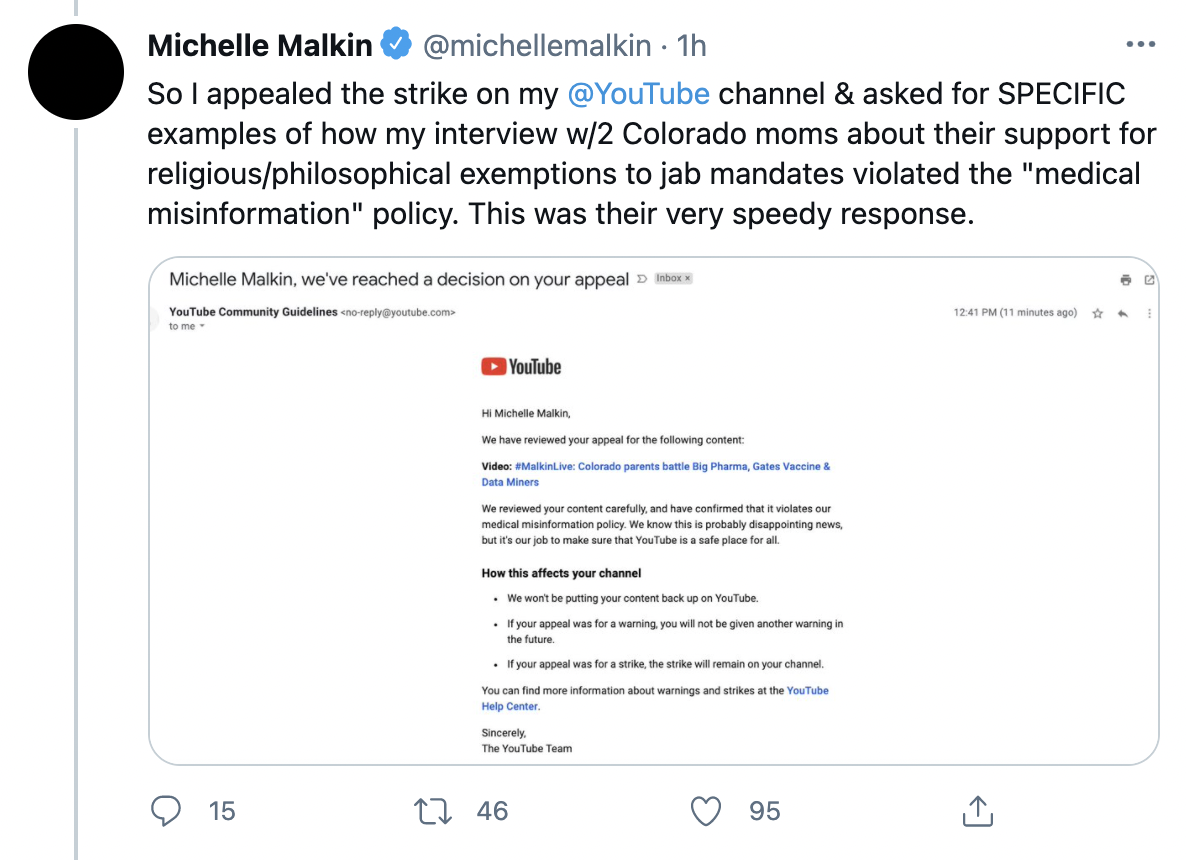 Malkin is one of many creators who have had their content censored by YouTube for going against health authorities such as the WHO. Dr. Ron Paul’s Liberty Report and Florida Governor Ron DeSantis’s public health roundtable are two of the numerous videos that have been removed by YouTube this month.