The Rite of Coronation of the Holy Roman Emperor

For those amongst my readers who share my passion for mediaeval history &/or monarchism, here is a treat. It was last used for the Coronation of Emperor Charles V by Pope Clement VII in 1540.

July 4th marked the death of the Archduke Otto von Hapsburg (1912-2011), eldest son and heir of the last reigning Emperor of Austria. In remembrance of him and his Cæsarian ancestors, we here provide a translation of the rite of coronation of the Holy Roman Emperor, from Vatican Codex 6112, published in Acta Selecta Caeremonialia Sanctae Romanae Ecclesiae, and probably used for the coronation of the Lord Henry VI and his wife the Lady Constance by the Most Holy Lord Celestine III in 1191.

Here begins the Roman Order for the Blessing of an Emperor, when he receives his crown from the Lord Pope in the Basilica of Blessed Peter the Apostle at the altar of the martyr Saint Maurice.


On Sunday, early in the morning, the Emperor-Elect descends with his wife to the church of Santa Maria Traspontina, near the Terebinth, and is there received with honours by the City Prefect and the Count of the Lateran Palace and his wife, the Judex Dativus,[1] and the Treasurer. He is led through the portico as the clergy of the City, all clad in copes, chasubles, dalmatics, and tunicles with thuribles sings Ecce mitto Angelum meum, up to a dais set up under the upper arch at the top of the steps before the bronze doors of the church of Santa Maria in Turri. There sits the Lord Pope in his chair surrounded by bishops, cardinals, deacons, and the other orders of the Church. 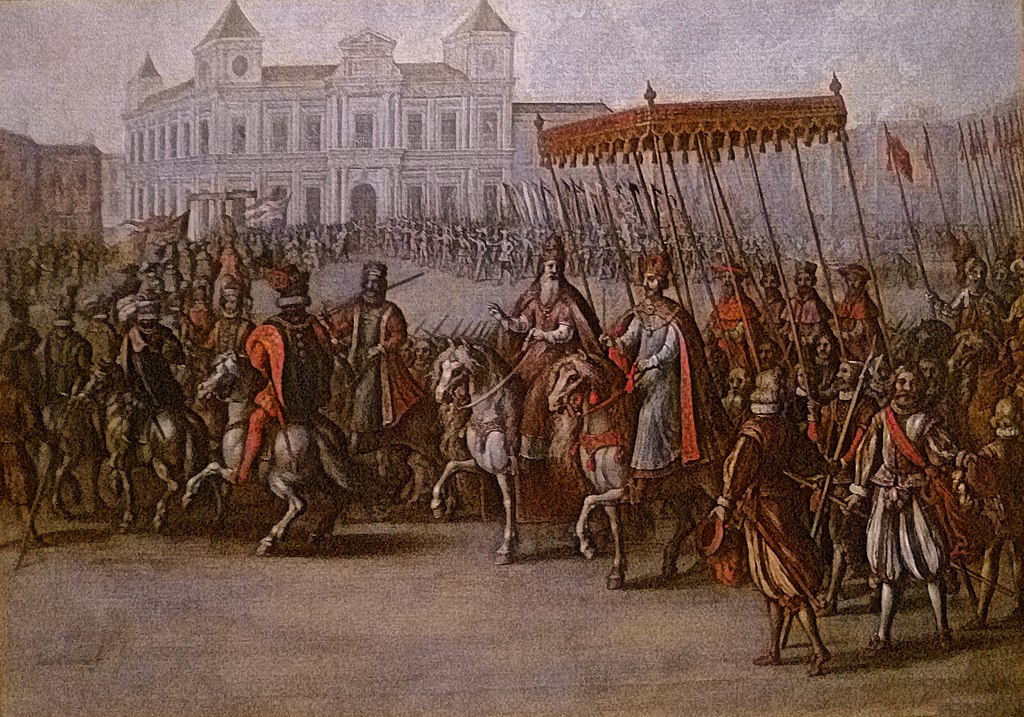 Pope Clement VII and Emperor Charles V walk in procession after the coronation. Sketch by Juan de la Corte, Museum of Santa Cruz, Toledo.
After lunch one of the deacons rises at the archdeacon’s command and reads a Lesson, after which the cantors rise and sing as they are accustomed. After the chant all rise for the blessings. Let the Lord Pope retire to his chamber, and the emperor to the Hall of the Empress Julia.
When the Emperor-Elect descends from the Mount of Joy,[3] and comes to the Ponticellum, he swears this oath to the Romans: “I, N., who shall be Emperor, swear that I will uphold the Romans’ good customs, and uphold their charters[4] without deceit or evil design. So help me God and these holy Gospels.” He should swear a similar oath at the Colline Gate and at the steps of St Peter.
[1] The ordinary municipal Judge in late-antique Rome, called dativus because he was not elected by the people but appointed by the emperor. See “Dativus” in Du Cange’s Glossarium mediae et infimae latinitatis.
[2] Also known as the Camera Majoris Palatii, or Triclinium.
[3] Thus called by pilgrims. In Ancient Rome, the hill was called Mons Vaticanus or Clivus Cinnae. The medieval Romans referred to it as Mons Malus, and later Mons Marius (Monte Mario), as it is still known today.
[4] The cartae tertii generis were charters relating to the possession of castles. A libellus was a charter governing the possession of estates. In essence, the emperor swears to rights and privileges of the Roman people.
Posted by Jovan-Marya Weismiller, T.O.Carm. at 14:07