I am pleasantly surprised that they're actually teaching history! Too many places are trying to destroy it!

With his stoic gaze, emu feather in his hat and sharp uniform, Private Ernest Harvey is the quintessential image of a member of Australia's armed services — except that he's a teddy bear.
A collection of bears dressed in uniform was initially developed to mark the centenary of World War I, but they're now being used to ensure younger generations not only know about the war, but the stories of those who fought.
The initiative to get the Centenary Bears into every primary school in Australia is being supported by veteran's groups, the RSL and Nashos (National Servicemen's Association) and is already proving a success. 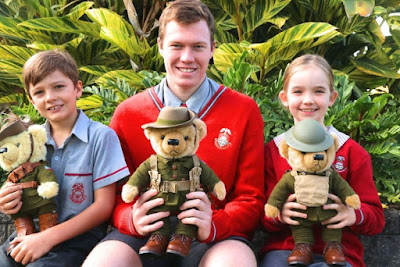 StudenZane Reid, Nick Carroll and Zahli Walsh say they love the bears and they're a great learning tool.(ABC Tropical North: Melissa Maddison)
One north Queensland school had already had four bears donated, with students as young as eight saying they wanted to learn more about the war and Australia's military history.
"The bears have ignited a passion in me," said grade three student Zane Reid from Whitsunday Anglican School in Mackay.
I like the way they're dressed and the emu feather in his hat. It makes me want to learn more about the Light Horse Brigade."

"With the Australian curriculum, you don't normally learn about World War I and World War II until about year nine or 10 humanities," he said.
"As Australians we definitely need to learn more about what happened, we need to be more informed and it all starts through your younger schooling years."

Ian Patterson, who coordinates the Centenary Bears project, said making young students aware of war and actively teaching them about the conflict was vital.
"We always say, 'Lest we forget', but I'm not sure everyone knows what we're remembering," he said.
"We all assume that kids will pick up this by osmosis, that they'll know what it is — the Anzac tradition — they'll understand what it means and how it came to be, but unless we actually take time to share the stories they're not going to pick it up."
Mr Patterson said the bears helped to put a human perspective to a conflict that many students may not have heard of, or have only heard about in terms of numbers lost.
We don't connect to numbers, we connect to people and the bears are a lovely medium between people and the stories.

Author Belinda Landsberry's book, Anzac Ted, tells the story of a teddy bear, that was taken to the front line and then passed through the generations.
She said the story was loosely based on a bear her husband was given as a child by his father.
But she had since learnt Australian troops did in fact take treasured toys to the front line.
"Someone from the Frenchs Forest Bushland Cemetery recently contacted me and said your story about Anzac Ted is true," she said.
"She said one of the soldiers buried there, Gilbert Nobbs, had a bear that he took with him to the front line after he was shot in the eye.
"I was blown away. I just knew it has to be a true story."
Ms Landsberry said once she started writing, it took less than a day to compose the rhyming verse, but the illustrations took much longer.

"I worked with museums in Australia and the UK and did a trip to Canberra to make sure I got it right.
"I had seen uniforms in other books that had incorrect patches, the slouch of the hat on the wrong side.


Accuracy is so important. I owed it to the service men and women to get it right.

Inspiring the next generation

Mr Patterson said the support of the RSL was key to the Bears in Schools program.
"They wore the uniform and they did their duty and it's the stories of their members that they're sharing," he said.
"This is the most novel way the RSL has thought of to engage young people in the history of Australians' service.
"The thing about teaching history to kids is that you've got to make it interesting to them and the bears, we hope, will spark an interest in all the different elements," he said.