Fishwrap’s @MichaelSWinters Wants Action From the US Bishops. So Does @FatherZ

The heretics and schismatics at the National 'catholic' Distorter want the USCCB to 'stop the schism', IOW to crack down on those horrible Catholics and make the Church safe for heresy! 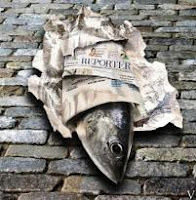 Michael Sean Winters (aka the Wile E. Coyote of the catholic Left, aka Madame Defarge the Tricoteuse) is
worried.   He has called to the US Bishops to stop the schism!
In his latest panic attack at Fishwrap, Winters identifies several groups which have him pointing with his knitting needles at the guillotine: LifeSite News, Church Militant, Sacred Heart Major Seminary in Detroit, Sophia Press, EWTN, etc.
Promoters of schism, all!  They must be suppressed!
The hypocrisy of a writer for the Fishwrap begging the US bishops to denounce the nefarious (he likes that word) machinations of promoters of schism is amusing.
Winters receives a paycheck from the National catholic Reporter, which was required by the bishop of Kansas City, where it is published, to remove the word “Catholic” from its title.  That dissident publication flipped him the bird and continued in its obstinate defiance of the bishop’s authority.
In contrast, when the Archbishop of Detroit asked Winter’s nemesis Michael Voris not to use the word Catholic in his organization’s original name, Real Catholic TV, Voris obeyed and changed the name to Church Militant.
When will Winters summon the NCR to the obedience Voris manifested not in words but in deeds?
Winters manifests a dark cruelty whenever he wants free speech suppressed.  For example, he thinks that converts shouldn’t be allowed to express opinions because they are often conservative.  HERE  He fantasizes about watching those with whom he disagrees be guillotined.  HERE  He demanded that Chad Pecknold lose his livelihood because of an opinion he didn’t agree with.  HERE
In the first line of his piece, Winters uses the phrase “a modest proposal“, invoking the idea of the poor Irish selling their children to be eaten.  Jonathan Swift’s essay was dark satire, of course, but into the darkness is where Winters goes when it comes to objects of his disapproval.
In demanding that the bishops of these USA crack down on people he doesn’t like, the panicky Winters wrote:

Changes in technology allow these groups to spread their divisiveness, so the seeds of schism might sprout more quickly and more comprehensively than before.

Dear St. Joseph, Terror of Demons and Protector of Holy Church, Chaste Guardian of Our Lord and His Mother, hear our urgent prayer and swiftly intercede with our Savior, whom as a loving father you defended so diligently, that He will pour abundant graces upon the staff of that organ of dissent the National catholic Reporter so that they will either embrace orthodox doctrine concerning faith and morals or that all their efforts will promptly fail and come to their just end. Amen.