Of course a Jesuit was involved! In cases like this, there's usually a Jesuit at the bottom of the dung heap.


A friend sent this with the single word: 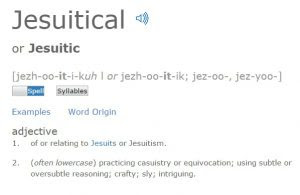 “Vile.”
The story from Associated Press is:

The day he picked to die, he had the party of a lifetime

The story is about a 75 year old man, homosexual, Catholic, with a background of suicidal tendencies, terminally ill with cancer, who made use of the Washington state “Death with Dignity Act” to kill himself, surrounded by helpers, etc. “Aid in dying” is allowed. They had a party, he announced his intention, and injected himself.

[…]
Fuller began returning more often to the Catholic church he had long attended. His spiritual views were hardly orthodox – he considered himself a shaman, and described his impending death as a state of “perpetual meditation” – but Seattle’s St. Therese Parish was known for accommodating a range of beliefs. Fuller was beloved there, and he craved the community. He had sung in the gospel choir and read scriptures from the lectern during services, sometimes delivering insightful or funny remarks off the cuff, said Kent Stevenson, the choir’s director.
Stevenson credited the “tenacity and clarity” of Fuller’s choice.
“It was hard to even cry because he was so forthcoming and so sober about it,” Stevenson said. “He was just so outrageously unique and such a character, this was completely in keeping with who Bob was.”
The Roman Catholic Church opposes aid-in-dying laws, citing the sanctity of life. But Fuller’s decision was widely known and accepted among the parishioners. At the service where he received his last communion on May 5, the Rev. Quentin Dupont brought over a group of white-clad children who were receiving their first communion.
They raised their arms and blessed him.
[…]

There’s a photo of the moment.  UPDATE: The Archdiocese of Seattle issued a statement saying that, at the time of the photo, the “the parish leadership was not aware of Mr. Fuller’s intentions.”  HERE
Something twitched in the back of my mind, so I did a search for “Quentin Dupont”.
SJ
Ahhh…. how to romanticize suicide!

[…]
In the kitchen, two volunteers with the nonprofit End of Life Washington mixed the drugs and Kahlua in a glass measuring cup. They said they considered themselves to be like midwives, helping usher people out of the world instead of into it.
“You know if you do this, if you put this in your system, you’ll go to sleep and you won’t wake up?” one, Stephanie Murray, told him as she delivered the syringes.
“I do,” Fuller answered.
Fuller plunged the syringes.
After a few moments of tense quiet, he led his friends in singing, “I’m so glad we had this time together,” the sign-off from the old Carol Burnett television show.
His eyes closed for longer and longer periods.
“I’m still here,” he said.
And then, he wasn’t.

It’s like something from Lord Of The World.
US HERE – UK HERE
Posted by Jovan-Marya Weismiller, T.O.Carm. at 14:14