Happy Victoria Day and a Happy Official (Canadian) Birthday to HM the Queen.

When I lived in Edmonton, each Victoria Day I would go to the Alberta Legislature where there is a permanent saluting station. The Royal Canadian Artillery would bring two howitzers and a band. The band would play patriotic songs and then, at noon, the howitzers would fire the 21-gun Royal Salute and the band would play 'O Canada' and 'God Save the Queen'.

Not an elaborate ceremony by any means, but two or three hundred people would show up. 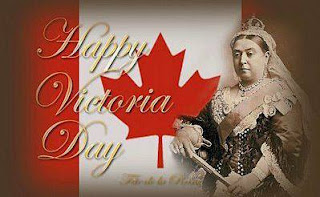 A bit about Victoria Day and its history:
Victoria Day (French: Fête de la Reine, lit. 'Celebration of the Queen') is a federal Canadian public holiday celebrated on the last Monday preceding May 25. Initially, in honour of Queen Victoria's birthday, it has since been celebrated as the official birthday of Canada's sovereign. It is informally considered to be the beginning of the summer season in Canada.

The holiday has been observed in Canada since at least 1845, originally falling on Victoria's actual birthday (May 24). The holiday has always been a distinctly Canadian observance and continues to be celebrated across the country. It falls on the Monday between the 18th and the 24th (inclusive) and so is always the penultimate Monday of May.