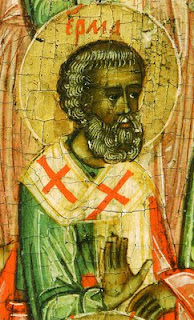 The Holy Apostle Hermas was a bishop in Philippopolis, Thrace. He was a Greek, but he spent some time in Rome. The holy Apostle Paul greets him in the Epistle to the Romans (Rom 16:14). The Apostle Hermas endured much grief from the pagans for preaching the Gospel, but he died in peace.

According to Tradition, Saint Hermas is the author of The Shepherd, an instructive book based on revelations from angels.
Troparion — Tone 3 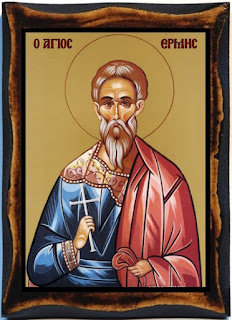 Holy Martyr Hermias suffered for Christ in the city of Comana during the persecution under the emperor Antoninus Pius (138-161). The governor Sebastian, who was in Cappadocia to arrest Christians, urged the saint to offer sacrifice to the pagan gods, promising him honours and mercy from the emperor.

The old soldier bravely confessed his faith in Christ. After a long exhortation, the governor gave orders to torture the saint. They beat him on the face so that the skin peeled from his face, and they threw him into a red-hot oven. When the oven was opened after three days, the martyr Hermias emerged from it unharmed.

The governor Sebastian ordered the sorcerer Marus to poison Saint Hermias with a potion. The poisonous drink did the saint no harm. A second goblet with even stronger poison also failed to kill the saint. The sorcerer believed in Christ the Saviour and was immediately beheaded. Saint Marus was baptized in his own blood and received a martyr’s crown.

Saint Hermias was subjected to even more terrible tortures. They raked his body with sharp instruments, threw him in boiling oil, and gouged out his eyes, but he gave thanks to the Lord Jesus Christ. Then they suspended the martyr head downward. For three days he hung in this position.

People sent by the governor to verify his death found him alive. Struck by the miracle, they were blinded with fright and began to call out to the saint to help them. The holy martyr ordered the blind to approach him and healed them in the Name of Jesus Christ.

In anger the governor ordered the skin flayed from the saint’s body, but he remained alive. Then the crazed Sebastian beheaded him with his own sword. Christians secretly buried the body of the martyr Hermias, whose relics bestowed numerous healings.
Troparion — Tone 3

Your holy martyr Hermias, O Lord, / through his sufferings has received an incorruptible crown from You, our God. / For having Your strength, he laid low his adversaries, / and shattered the powerless boldness of demons. / Through his intercessions, save our souls!
Kontakion — Tone 2

(Podoben: “You sought the heights...”)
You appeared as a bright star announcing Christ with your radiance, / which is repulsive to this world, O Martyr Hermias; / extinguishing the allure of false gods, / you enlighten the faithful, / always interceding for us all.
Posted by Jovan-Marya Weismiller, T.O.Carm. at 00:06