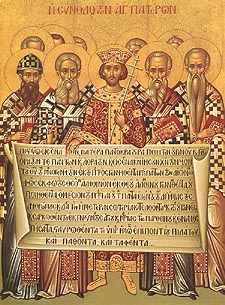 On the seventh Sunday of Pascha, we commemorate the holy God-bearing Fathers of the First Ecumenical Council.

The Commemoration of the First Ecumenical Council has been celebrated by the Church of Christ from ancient times. The Lord Jesus Christ left the Church a great promise, “I will build My Church, and the gates of hell shall not prevail against it” (Mt. 16:18). Although the Church of Christ on earth will pass through difficult struggles with the Enemy of salvation, it will emerge victorious. The holy martyrs bore witness to the truth of the Savior’s words, enduring suffering and death for confessing Christ, but the persecutor’s sword is shattered by the Cross of Christ.

Persecution of Christians ceased during the fourth century, but heresies arose within the Church itself. One of the most pernicious of these heresies was Arianism. Arius, a priest of Alexandria, was a man of immense pride and ambition. In denying the divine nature of Jesus Christ and His equality with God the Father, Arius falsely taught that the Savior is not consubstantial with the Father, but is only a created being.

A local Council, convened with Patriarch Alexander of Alexandria presiding, condemned the false teachings of Arius. However, Arius would not submit to the authority of the Church. He wrote to many bishops, denouncing the decrees of the local Council. He spread his false teaching throughout the East, receiving support from certain Eastern bishops.

Investigating these dissentions, the holy emperor Constantine (May 21) consulted Bishop Hosius of Cordova (Aug. 27), who assured him that the heresy of Arius was directed against the most fundamental dogma of Christ’s Church, and so he decided to convene an Ecumenical Council. In the year 325, 318 bishops representing Christian Churches from various lands gathered together at Nicea.

Among the assembled bishops were many confessors who had suffered during the persecutions, and who bore the marks of torture upon their bodies. Also participating in the Council were several great luminaries of the Church: Saint Nicholas, Archbishop of Myra in Lycia (December 6 and May 9), Saint Spyridon, Bishop of Tremithos (December 12), and others venerated by the Church as holy Fathers.

With Patriarch Alexander of Alexandria came his deacon, Athanasius [who later became Patriarch of Alexandria (May 2 and January 18)]. He is called “the Great,” for he was a zealous champion for the purity of the Catholic Faith. In the Sixth Ode of the Canon for today’s Feast, he is referred to as “the thirteenth Apostle.”

The emperor Constantine presided over the sessions of the Council. In his speech, responding to the welcome by Bishop Eusebius of Caesarea, he said, “God has helped me cast down the impious might of the persecutors, but more distressful for me than any blood spilled in battle is for a soldier, is the internal strife in the Church of God, for it is more ruinous.”

Arius, with seventeen bishops among his supporters, remained arrogant, but his teaching was repudiated and he was excommunicated from the Church. In his speech, the holy deacon Athanasius conclusively refuted the blasphemous opinions of Arius. The heresiarch Arius is depicted in iconography sitting on Satan’s knees, or in the mouth of the Beast of the Deep (Rev. 13).

In the Nicene Creed, the holy Fathers set forth and confirmed the Apostolic teachings about Christ’s divine nature. The heresy of Arius was exposed and repudiated as an error of haughty reason. After resolving this chief dogmatic question, the Council also issued Twelve Canons on questions of churchly administration and discipline. Also decided was the date for the celebration of Holy Pascha. By decision of the Council, Holy Pascha should not be celebrated by Christians on the same day with the Jewish Passover, but on the first Sunday after the first full moon of the vernal equinox (which occured on March 22 in 325).

The First Ecumenical Council is also commemorated on May 29.
Troparion — Tone 8

You are most glorious, O Christ our God! / You have established the Holy Fathers as lights on the earth! / Through them you have guided us to the true faith! / O greatly Compassionate One, glory to You!

The Apostles’ preaching and the Fathers’ doctrines have established one faith for the Church. / Adorned with the robe of truth, woven from heavenly theology, / it defines and glorifies the great mystery of our Holy Faith!
✠✠✠✠✠ 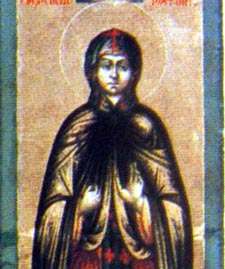 Saint Theodosia of Tyre lived during the third and fourth centuries. Once, during a persecution against Christians, which had already lasted for five years, the seventeen-year-old Theodosia went up to condemned Christian prisoners in the Praetorium in Caesarea, Palestine. It was the day of Holy Pascha, and the martyrs spoke about the Kingdom of God. Saint Theodosia asked them to remember her before the Lord when they should come to stand before Him.

Soldiers saw that the maiden bowed to the prisoners, and they seized her and led her before the governor, Urban. The governor advised the maiden to offer sacrifice to the idols but she refused, confessing her faith in Christ. Then they subjected the saint to cruel tortures, raking her body with iron claws until her bones were exposed.

The martyr was silent and endured the sufferings with a happy face, and to a second suggestion by the governor to offer sacrifice to the idols she answered, “You fool, I have been granted to join the martyrs!” They threw the maiden with a stone about her neck into the sea, but angels drew her out from the depths. Then they threw the martyr to the wild beasts to be eaten by them. Seeing that the beasts would not touch her, they cut off her head.

By night Saint Theodosia appeared to her parents, who had tried to talk their daughter into not going to the sufferings. She was in bright garb with a crown upon her head and a luminous gold cross in her hand, and she said, “Behold the great glory of which you wanted to deprive me!”

The Holy Martyr Theodosia of Tyre suffered for Christ in the year 307 or 308. On May 29 we commemorate the transfer of her relics to Constantinople and Venice. She is also commemorated on April 3.
Troparion — Tone 4

Your lamb Theodosia, / calls out to You, O Jesus, in a loud voice: / “I love You, my Bridegroom, / and in seeking You, I endure suffering. / In baptism I was crucified so that I might reign in You, / and I died so that I might live with You. / Accept me as a pure sacrifice, / for I have offered myself in love.” / Through her prayers save our souls since You are merciful.
Posted by Jovan-Marya Weismiller, T.O.Carm. at 00:06