I'd not thought of this possible patronage for him, but given his life's work, it makes perfect sense. St Titus Brandsma, OCarm, pray for Catholic journalists! 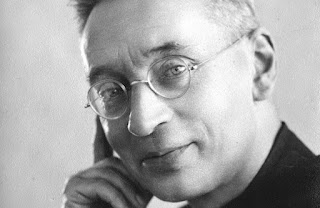 ROME. As of May 15, Catholic journalists around the world will be able to count one of their number among the saints, as Titus Brandsma, a Dutch Carmelite killed at the Dachau concentration camp in 1942, is canonized in St. Peter’s Square. At a moment when Catholic opinion journalism is in danger of falling victim to the ever-present dangers of trivialization, tribalism and hysteria-mongering in this age of Internet and social media demagogy, St. Titus Brandsma’s example of courage and fidelity under great pressure is well worth pondering.

Anno Sjoerd Brandsma was born in the Dutch province of Friesland in 1881 to devoutly Catholic parents in what was then a dominantly Protestant area. At 17, young Anno entered the Carmelite novitiate at Boxmeer on the River Meuse, taking the religious name “Titus” in honor of his father, named for one of the companions of St. Paul: the early Church’s premier journalist, so to speak. Ordained a priest on June 7, 1905, Father Titus earned a doctoral degree at Rome’s Gregorian University in 1909 and then returned to the Netherlands, where he displayed remarkable energy in a variety of fields.

For a decade and a half, he worked as a Catholic writer, teacher and controversialist: he launched and led a project to translate into Dutch the works of the great Carmelite mystic and reformer, St. Teresa of Ávila; he created a high school in 1919 and led it for two years; he defended an avant-garde painter’s expressionist depiction of the Stations of the Cross, on which he wrote meditations; and in 1923 he became one of the founders of the Catholic University of Nijmegen. There, he served on the faculty, specializing in philosophy and the theology of mysticism, led the university for a year as Rector Magnificus and, in an era when the professoriate was often typically characterized by its hauteur and distance from mere students, he distinguished himself by his openness and receptivity.

In the midst of these various educational endeavors, Father Titus Brandsma tilled the fields of Catholic journalism, becoming chaplain to the National Union of [Dutch] Catholic Journalists in 1935. Interestingly enough, for a man depicted by a recent biographer as politically naïve and theoretically sympathetic to authoritarian forms of government, Father Brandsma was an unremitting foe of Nazi ideology, urging Catholic editors to avoid publishing propaganda pieces for National Socialism and taking a firm stand against the anti-Semitism deeply embedded in the Nazi project. His commitment to the truths of Catholic faith and to the independence of the press eventually led him to his own Via Crucis.

After the German conquest of Holland in 1940, Brandsma urged the Dutch bishops to speak out against Nazi human rights violations, including the persecution of Dutch Jews. This made him a target of the Occupation regime, and he was arrested after personally distributing a clandestine Dutch bishops’ letter to Dutch Catholic editors; the letter courageously instructed the journalists to disregard a new regulation requiring Catholic newspapers and magazines to print official Nazi documents and articles. Arrested by the Gestapo on January 19, 1942, Titus Brandsma was imprisoned in three different Dutch locations before being transferred to the concentration camp at Dachau, just outside Munich.

Conditions at Dachau were beyond wretched, and the 61-year-old Carmelite’s health deteriorated rapidly. Consigned to the camp “hospital,” in July 1942, he was subjected to “medical experiments” before being killed by a lethal injection on July 26. Knowing that he was to be executed, he prayed that God would eventually touch the conscience of the nurse (a member of the SS) who was acting as infirmarian-executioner — and gave her his distinctive Carmelite rosary, although she protested that she was a “lost Catholic.” According to a pamphlet I picked up in the Carmelite church of S. Maria in Traspontina near the Vatican, that same nurse went to a Carmelite priory some years later to seek forgiveness and gave testimony at the beatification inquiry conducted in Rome in November 1985.

Public life today is too often a matter of the survival of the shrillest, and it is painful to note how that degradation of debate and commentary has seeped into the “new media” of Catholic websites, YouTube channels, Facebook posts and Twitter feeds. The life and example of this Dutch Carmelite, a complex personality who sometimes displayed a short fuse but who wrote — and urged others to write — as if Catholic journalism could be a powerful form of Christian witness and evangelization, is welcome indeed. St. Titus Brandsma, O. Carm., pray for us.
Posted by Jovan-Marya Weismiller, T.O.Carm. at 15:36