A fascinating story on the possible solution to a century-old family mystery about a Canadian soldier who won the Military Medal.

From The Spirit's Sword

A little blast from the past, just for some fun.  Not entirely certain who these three are. The women are my grandmother and probably her sister. My Grandmother is the one in the spiked helmet.  The man in the middle is someone I believed was referred to as 'uncle Jim'. They are wearing My Grandfather's helmet and a German cloth hat and Pickelhaub (that's the one with the spike) that he brought home from the First World War. It was common for troops to 'liberate' souvenirs from captured Germans. The Germans apparently had a saying: "The British fight for honour, and the Canadians for souvenirs." 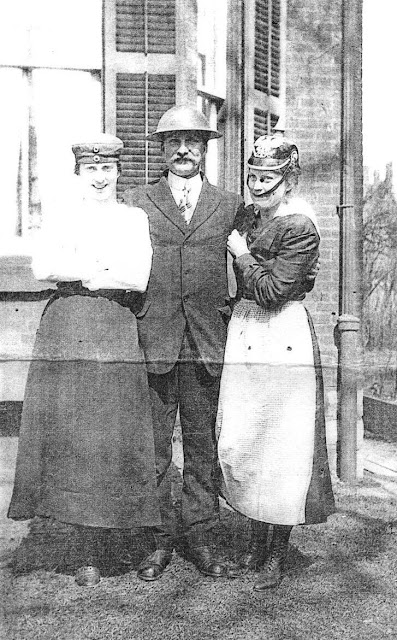 The photo may give us a small clue as regards an old family mystery.  In addition to his German souvenirs, my Grandfather also came home with the Military Medal (seriously, that is the name), but he never told any of his sons how he won it.  however, one of my uncles overheard him telling another veteran that '(he) ran into some Germans, and they were more surprised than he was, so he managed to take them prisoner.'  Grandfather was a runner, sent to deliver messages, so it seems he was running an errand (which he most likely have done alone) when he encountered the Germans.

I also have some letters he wrote home during the war.  In one of them, written immediately after the Battle of Amiens, he jokingly says that he took some prisoners and got some souvenirs.  So perhaps the prisoners he referred to when speaking to the other veteran were the same ones he captured at Amiens... except many men took prisoners at Amiens.  Amiens was an utter disaster for the Germans, and went down in their lore as 'the black day for the German Army.'  So why would he get a medal for that, when everybody took some prisoners?

Here's where it gets really interesting.  It would be unusual for a German officer to be wearing a pickelhaub that late in the war.  Only someone quite high up the chain would be wearing one.  So, is there any evidence that someone that someone high up was captured that day?  As a matter of fact, there is.  A cousin of mine went over the war diary of Grandfather's battalion, and he saw list among the German captured were so many non commissioned, so many of each rank of officer, and so on and so on, and one general.  Now, capturing a general, that's not just any prisoner.  People would notice you bringing one of those in.

So, to recap: Assuming my uncle heard his father correctly, and assuming that the prisoners mentioned in the letter after Amiens were the ones he spoke of, and assuming the souvenirs came from those prisoners captured at Amiens, and assuming several other things as well, it is possible, just possible, my grandfather (who was a lowly private, buy the way) caught himself a general and his staff. And that's something for which they might give you a medal.