Today is the Feasts of the Holy Prophet Joel, of the Holy Martyr Varus and Those With Him, and of Our Venerable Father John of Rila.
✠✠✠✠✠ 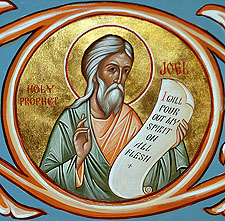 The Prophet Joel (800 B.C.) predicted the desolation of Jerusalem. He also prophesied that the Holy Spirit would be poured out upon all people, through the Savior of the world (Joel 2:28-32).

The hymnographer Anatolius links Joel’s prophecy to the Nativity of the Lord. In the Praises at Matins on the Sunday following the Nativity, he refers to Joel 2:30, saying that the blood refers to the Incarnation, the fire to the Divinity, and the pillars of smoke to the Holy Spirit.
Troparion — Tone 2

We celebrate the memory / of Your prophet Joel, O Lord; / through him, we entreat You, / save our souls.
Kontakion — Tone 4

(Podoben: “Today You have shown forth...”)
Enlightened by the Spirit, your pure heart became the dwelling place of most splendid prophecy; / for you saw things far off as if they were near. / Therefore, we honour you, blessed and glorious Prophet Joel.
✠✠✠✠✠ 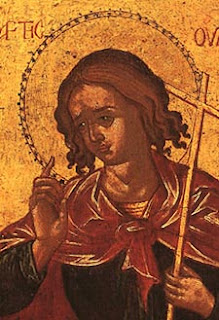 Martyr Varus lived in Egypt during the period of several persecutions against Christians (late third to early fourth century). Varus (Ouaros) was a military commander and secretly a Christian. He gave assistance to many of the persecuted and imprisoned Christians, and he visited the prisoners at night. He also brought food to the prisoners, dressed their wounds, and gave them encouragement.

Once Varus spent a whole night talking with seven imprisoned monks. These men were Christian teachers who had been beaten and starved. Varus marched with the teachers when they were led to their execution. The judge, seeing Varus’ strong faith, had him fiercely beaten. Varus died during the beating. After his death, the monks were beheaded.
Troparion — Tone 4

Your holy martyrs, O Lord, / through their sufferings have received incorruptible crowns from You, our God. / For having Your strength, they laid low their adversaries, / and shattered the powerless boldness of demons. / Through their intercessions, save our souls!
Kontakion — Tone 4

Following Christ, O Martyr Varus, you drank of His chalice; / you received the crown of martyrdom and now rejoice with the angels. / Pray for our souls unceasingly.
✠✠✠✠✠ 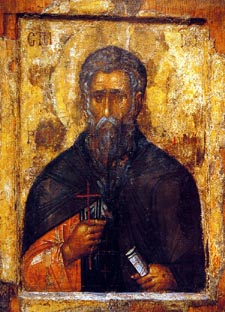 Today we commemorate the transfer of the relics of Saint John, Abbot of Rila in Bulgaria (1238).

The relics of Saint John were transferred from the city of Sredets [Sofia] to Trnovo, the capital of the Bulgarian realm, in the year 1238. See August 18 for his Life.
Troparion — Tone 1

Your life was a foundation of repentance / and a model of compunction, / an image of consolation and spiritual perfection, / equal to the angels, O venerable one. / You persevered in prayer, fasting and tears, O Father John; / intercede with Christ God for our souls.
Kontakion — Tone 8

Imitating the life of the angels and forsaking all earthly things, / you fled to Christ, O venerable one. / Protecting yourself with His commandments, / you were shown to be an unshakable pillar against the attacks of the enemy. / Therefore, we cry to you: “Rejoice, O Father John, most brilliant light!”
Posted by Jovan-Marya Weismiller, T.O.Carm. at 00:05