Today is the Twenty-First Sunday After Pentecost and the Feasts of the Holy Prophet Osee and of the Venerable Hieromartyr Andrew of Crete.
✠✠✠✠✠ 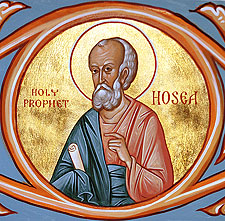 The Holy Prophet Osee the first of the minor prophets, belonged to the tribe of Issachar. He lived during the ninth century before Christ, in the kingdom of Israel. He was a contemporary of the holy Prophets Isaiah, Micah and Amos. During this time, many of his fellow Israelites had forgotten the true God and worshipped idols. The holy Prophet Osee attempted to turn them again to the faith of their Fathers by his wise counsels. Denouncing the iniquities of the people of Israel (i.e. the northern kingdom Israel), the prophet proclaimed to them great misfortunes from a foreign people and their removal into captivity by Assyria.

Almost a thousand years before the coming of the Savior, and through the inspiration of the Holy Spirit, the prophet foretold the end of sacrificial offerings and of the priesthood of Aaron (Osee 3:4-5), and that the knowledge of the True God would spread through all the earth (Osee 2:20-23). Osee spoke also about Christ, how He would return from out of Egypt (Osee 11:1; compare Mt. 2:15), that He would be resurrected on the third day (Osee 6 and especially Osee6:2; compare with 1 Cor.15:4), and that He would conquer death (Osee13-14. Compare 1 Cor.15:54-55).

The prophecies of Saint Osee are included in the book that bears his name. The prophetic service of Saint Osee continued for more than sixty years. The God-inspired prophet died in deep old age, having devoted all his life to fulfilling the Will of God.
Troparion — Tone 2

We celebrate the memory / of Your prophet Osee, O Lord; / through him we entreat You, / save our souls.
Kontakion — Tone 4

(Podoben: “Today You have shown forth...”)
Enlightened by the Spirit, your pure heart became the dwelling place of most splendid prophecy; / for you saw things far off as if they were near. / Therefore, we honour you, blessed and glorious Prophet Osee.
✠✠✠✠✠ 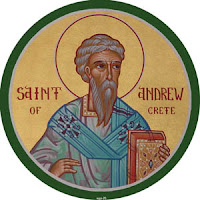 The Hieromartyr Andrew of Crete lived during the reign of the iconoclast emperor Constantine Kopronymos (741-775), who ordered Christians, under penalty of death, to remove the holy icons from their churches and homes. Believers, who fearlessly resisted the impious iconoclast, and held firmly to the traditions of the holy Fathers, were locked in prison. When the venerable Andrew heard that the emperor was throwing virtuous and pious Christians into prison instead of thieves and robbers, he went to the Church of the Great Martyr Mamas (September 2) in Constantinople and in front of everyone, denounced the heretic for persecuting the true Faith.

In an attempt to justify himself the emperor said that it was folly to bestow veneration on wood and paint. To this the monk replied that whoever suffers for holy icons suffers for Christ, but whoever reviles the icon upon which Christ is depicted, offers insult to Christ Himself. The enraged iconoclast gave orders to torture Saint Andrew without mercy.

As he was being dragged through the streets to the place of execution, someone cut off the saint’s feet. As a result, Saint Andrew was freed from his torments by death. A hundred years later a Canon was written to the saint by Saint Joseph the Hymnographer (April 4). The saint heals those afflicted with seizures.
Troparion — Tone 4

Trained in asceticism on the mountain, / with the weapon of the Cross you destroyed the spiritual assaults of the hostile powers, all-blessed one; / Again you bravely prepared for combat / and slew Copronymus with the sword of faith; / for both struggles you have been crowned by God, monk-martyr Andrew of eternal memory.
Kontakion — Tone 3

Today the Queen of cities / celebrates the radiant feast of your light-bearing memory, / and invites every city and country to join her. / She rejoices for she has gained a great treasure: / your body which sustained many struggles, martyr Andrew, beacon of Orthodoxy.
Posted by Jovan-Marya Weismiller, T.O.Carm. at 00:06