Today is the Feasts of Our Venerable Father Euthymius the Younger and of the Holy Venerable Hieromartyr Lucian, Priest of Great Antioch.
✠✠✠✠✠ 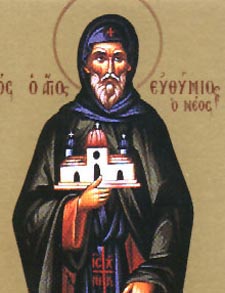 Saint Euthymius the New of Thessalonica and Mt Athos, in the world was named Nicetas, and he was a native of the city of Ancyra in Galatia. His parents, Epiphanius and Anna, led virtuous Christian lives, and from childhood their son was meek, pious and obedient. At age seven he was left fatherless and he soon became the sole support of his mother in all matters. Having entered military service, Nicetas married, on the insistence of his mother. After the birth of a daughter, he secretly left home in order to enter a monastery. For fifteen years the venerable Euthymius lived the ascetic life on Mount Olympus, where he learned monastic deeds from the Elders.

The monk went to resettle on Mount Athos. On the way, he learned that his mother and wife were in good health. He informed them that he had become a monk, and he sent them a cross, calling on them to follow his example. On Mt Athos he was tonsured into the Great Schema and lived for three years in a cave in total silence, struggling with temptations. Saint Euthymius also lived for a long time as a stylite, not far from Thessalonica, instructing those coming to him for advice and healing the sick.

The monk cleansed his mind and heart to such an extent that he was granted divine visions and revelations. At the command of the Lord, Saint Euthymius founded two monasteries in 863 on Mount Peristeros, not far from Thessalonica, which he guided for 14 years, with the rank of deacon. In one of these, his wife and mother received monastic tonsure. Before his death, he settled on Hiera, an island of Mt Athos, where he reposed in 898. His relics were transferred to Thessalonica. Saint Euthymius is called “the New” to distinguish him from Saint Euthymius the Great (January 20).

The image of God was truly preserved in you, O Father, / for you took up the Cross and followed Christ. / By so doing you taught us to disregard the flesh for it passes away / but to care instead for the soul, since it is immortal. / Therefore your spirit, venerable Euthymius, rejoices with the angels.
Kontakion — Tone 2
Crossing dryshod through the storms of life, / venerable and divinely wise Euthymius, / you mightily drowned the bodiless foe in the streams of your tears; / you received the gift of miracles to heal all sufferings. / Unceasingly pray for us all.
✠✠✠✠✠ 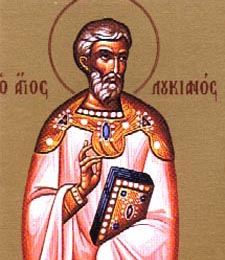 The Hieromartyr Lucian, Presbyter of Antioch, was born in the Syrian city of Samosata. At twelve years of age, he was left orphaned. Lucian distributed his possessions to the poor, and went to the city of Edessa to the confessor Macarius, under the guidance of whom he diligently read Holy Scripture and learned the ascetic life. For his pious and zealous spreading of Christianity among the Jews and pagans, Lucian was made a presbyter.

In Antioch, Saint Lucian opened a school where many students gathered. He taught them how to understand the Holy Scriptures, and how to live a virtuous life. Saint Lucian occupied himself with teaching, and he corrected the Greek text of the Septuagint, which had been corrupted in many places by copyists and by heretics who deliberately distorted it in order to support their false teachings. The entire Greek text of the Bible which he corrected was hidden in a wall at the time of his confession of Christ, and it was found during the lifetime of Saint Constantine the Great.

During the persecution of Diocletian, Saint Lucian was arrested and was sent to prison in Nicomedia, where for nine years he encouraged other Christians with him to remain steadfast in their confession of Christ, urging them not to fear tortures or death.

Saint Lucian died in prison from many terrible tortures and from hunger. Before his death, he wished to partake of the Holy Mysteries of Christ on the Feast of Theophany. Certain Christians who visited him brought bread and wine for the Eucharist. The hieromartyr, bound by chains and lying on a bed of sharp potsherds, was compelled to offer the Bloodless Sacrifice upon his chest, and all the Christians there in prison received Communion. The next day the emperor sent people to see if the saint was still alive. Saint Lucian said three times, “I am a Christian,” then surrendered his soul to God. The body of the holy martyr was thrown into the sea, but after thirty days dolphins brought it to shore. Believers reverently buried the body of the much-suffering Saint Lucian.

Saint Lucian was originally commemorated on January 7, the day of his death. Later, when the celebration of the Synaxis of Saint John the Baptist was appointed for this day, the feast of Saint Lucian was transferred to October 15.

The October date may be associated with the dedication of a church that was built in Antioch by Saint Helen (May 21) over Saint Lucian’s holy relics.

It may be that the Russians thought of Saint Lucian as a bishop because of his importance to the Church, and so that is how they depicted him. Similarly, Saint Charalampus (February 10) is depicted as a priest in Greek icons, and as a bishop in Russian icons.Although he was only a priest, sometimes Saint Lucian is depicted in the vestments of a bishop. The Stroganov Guide for Iconographers was published in Russia in 1869, based on a 1606 manuscript. There Saint Lucian is depicted wearing a phelonion and holding a Gospel. He does not wear the omophorion of a bishop, however. Another handbook, the Litsevoy Podlinnik, states that Saint Lucian is to be depicted with the omophorion.
Troparion — Tone 3

Radiant with the Spirit, / you taught true knowledge of the true faith; / a trainer of martyrs, O Lucian, / you were glorified in the contest. / Intercede with Christ our God that He may grant us great mercy!
Troparion — Tone 4

Your holy martyr Lucian, O Lord, / through his suffering has received an incorruptible crown from You, our God. / For having Your strength, he laid low his adversaries, / and shattered the powerless boldness of demons. / Through his intercessions, save our souls!
Kontakion — Tone 2

We honour you with hymns of glory, / Lucian, the radiant star. / You first became radiant by your detachment from the things of this world; / then you were raised up by your struggle. / Unceasingly pray for us all.
Posted by Jovan-Marya Weismiller, T.O.Carm. at 00:05