Today is the Feasts of the Holy Martyrs Nazarius, Gervasius, Protasius and Celsus and of Our Venerable Mother Paraskevḗ (Petka) of Serbia.
✠✠✠✠✠ 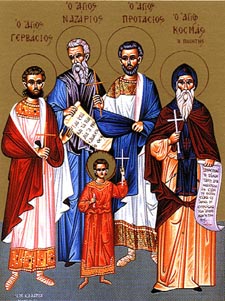 The Holy Martyrs Nazarius, Gervasius, Protasius and Celsus of Milan suffered during the reign of the emperor Nero (54-68). Saint Nazarius (son of the Christian Perpetua and the Jew Africanus) was born at Rome and was baptized by Bishop Linus. From his youth Nazarius decided to devote his life to preaching Christ and to aid wandering Christians. With this intent he left Rome and arrived in Mediolanum (Milan).

Saints Protasius and Gervasius were twin brothers from Mediolanum (Milan), the sons of wealthy Roman citizens, Vitalius and Valeria. When they received their inheritance from their parents, they distributed the money to the poor, freed their slaves, and occupied themselves with fasting and prayer. The pagans locked them up in prison because they were Christians. Saint Nazarius met Protasius and Gervasius when he was visiting Christians in the Mediolanum prison. He so loved the twins that he wanted to suffer and die with them. The ruler heard that he was visiting the prisoners, so he had Saint Nazarius beaten with rods, then driven from the city.

Saint Nazarius proceeded to Gaul (modern France), and there he successfully preached Christianity and converted many pagans. In the city of Kimel he baptized Celsus, the son of a Christian woman who entrusted her child to the saint. Nazarius raised the boy in piety and acquired a faithful disciple and coworker in his missionary labours.

The pagans threw the saints to wild animals to be eaten, but the beasts would not touch them. Afterwards, they tried to drown the martyrs in the sea, but they walked upon the water as if on dry land. The soldiers who carried out the orders were so amazed that they themselves accepted Christianity and released the holy martyrs.

Saints Nazarius and Celsus went to Milan and visited Gervasius and Protasius in prison. For this, they were brought before Nero, who ordered that Saints Nazarius and Celsus be beheaded. Soon after this the holy brothers Gervasius and Protasius were also executed. The relics of all four martyrs were stolen by a Christian named Philip, and were buried in his house.

Many years later, during the reign of the holy Emperor Theodosius (408-450), Saint Ambrose, Bishop of Milan (December 7), discovered the relics of Saints Gervasius and Protasius through a revelation from God.

In the reign of Arcadius and Honorius, Saint Ambrose also discovered the relics of Saints Nazarius and Celsus. The holy relics, glorified by many healings, were solemnly transferred to the Milan cathedral.
Troparion — Tone 4

Let us praise the fourfold company of martyrs: / Nazarius, Protase, Gervase and Celsus. / For they preached the Trinity to all / and by their contest dispelled the worship of idols. / Through their prayers, O Christ God, have mercy on us all.
✠✠✠✠✠ 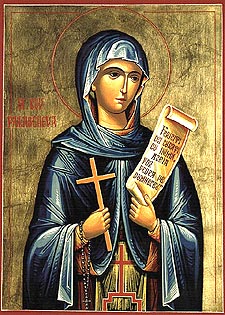 Saint Paraskevḗ the New was born into a pious family, living during the eleventh century in the village of Epivato, between Silistra and Constantinople. Her older brother Euthymius became a monk, and later he was consecrated as Bishop of Matidia. One day, while attending the divine services, the words of the Lord pierced her heart like an arrow, “If any man will come after Me, let him deny himself” (Mt. 16:24). From that time she began to distribute her clothing to the needy, for which reason she endured much grief from her family.

Upon the death of her parents, the saint was tonsured into monasticism at the age of fifteen. She withdrew to the Jordanian desert where she lived the ascetic life until she reached the age of twenty-five. An angel of the Lord ordered her to return to her homeland, so she stayed at Epivato for two years.

Saint Paraskevḗ departed to the Lord at the age of twenty-seven, and was buried near the sea. Because of the many miracles which took place at her grave, her relics were uncovered and found to be incorrupt. They were placed in the church of the Holy Apostles at Epivato, where they remained for about 175 years.

Saint Paraskevḗ’s relics were moved to Trnovo, Bulgaria in 1223 and placed in the cathedral. Patriarch Euthymius wrote her Life and established the day of her commemoration as October 14. The Turks occupied Bulgaria in 1391, and her relics were given to Mircea the Elder, Prince of the Romanian Land (one of the districts of Romania). In 1394 the relics were given to Princess Angelina of Serbia (July 30), who brought them to Belgrade. For 120 years Saint Paraskevḗ’s relics rested in Constantinople in the patriarchal cathedral.

On June 13, 1641, her incorrupt relics were transferred to the monastery of the Three Hierarchs at Jassy in Rumania, where many healings took place. On December 26, 1888, after being rescued from a fire, Saint Paraskevḗ’s relics were moved again. This time they were placed in the new cathedral at Jassy, where they remain until the present day.
Troparion — Tone 2

You loved the solitary and hesychastic life, / and then, with diligence, you hastened after Christ, your Bridegroom, and took up His easy yoke in your youth. / Armed with the Sign of the Cross, / you contended courageously against noetic enemies; / through fasting, prayer, and by shedding tears, / you extinguished the embers of the passions, O glorious Paraskevḗ. / Now, standing in the heavenly Bridal Chamber of Christ, together with the wise virgins, / intercede for us who honour your holy memory.
Kontakion — Tone 6

Devoutly let us all praise the most honorable Paraskevḗ, / a holy intercessor for the afflicted; / for she left this perishable life behind and received eternal incorruption. / Therefore, she has been given the grace of working miracles, by the command of God.
Posted by Jovan-Marya Weismiller, T.O.Carm. at 00:05