Once again, Francis says something that is either a) completely meaningless, or b) absolutely opposed to what Scripture says.

So we have this: 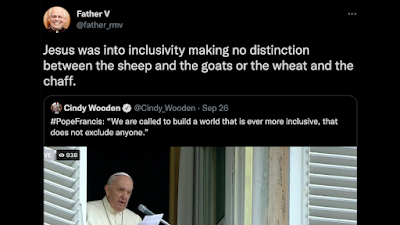 Now that's just pretty to see, but it means nothing in modern discourse.

Is that what Pope Francis means? I realize God's love is universal, and Christ reaches out to all sinners. Does that mean inclusive despite - anything? One can be, do, think, or whatever and it's all inclusion and no distinction? Does Pope Francis mean white supremacists, arms dealers, people who deny Global Warming, people who question Covid lockdowns, people who support border walls? I don't know. He might.

But once again, Pope Francis uses empty pop culture terms that are common on Oprah and The View, but are of little use elsewhere. If only he would speak like a religious leader not of the age, but merely in the age.

Oh, and for the record, I had no idea that Jesus's teachings on the sheep and goats and wheat and chaff meant that there are no distinctions. I thought that the point was you didn't want to be goats or chaff, not that it didn't matter to Jesus. Did I just seriously misunderstand those teachings?
Posted by Jovan-Marya Weismiller, T.O.Carm. at 16:19