Today is the Feasts of The Holy Martyr Callistratus and His Wife and of Our Venerable Father Nilus, Founder and Hegumen of the Grottaferrata Monastery.
✠✠✠✠✠ 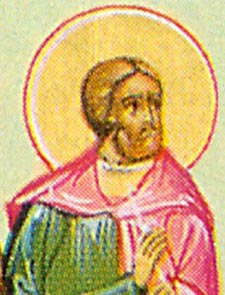 Saint Callistratus was a native of Carthage. An ancestor of Saint Callistratus, Neochorus, had served under the emperor Tiberius in Palestine, under the command of Pontius Pilate, the procurator of Judea, and was a witness to the suffering on the Cross of our Lord Jesus Christ, His voluntary death and glorious Resurrection.

The saint’s father was a Christian, and he raised his son in faith and piety. Also like his father, Saint Callistratus became a soldier and excelled among his pagan military comrades by his good conduct and gentle disposition.

At night when everyone slept, he usually stayed up at prayer. Once, a soldier sleeping nearby heard Saint Callistratus invoking the Name of the Lord Jesus Christ, and he reported this to the military commander, who in turn summoned Callistratus, interrogated him and wanted to make him offer sacrifice to idols. The saint resolutely refused to do this, so the military commander ordered that the saint be beaten. Then, covered with wounds, the saint was dragged over sharp stones. The beating and the torments did not sway the firm will and brave endurance of the sufferer.

The saint was sewn up in a leather sack and drowned in the sea. By God’s mercy, however, the sack struck a sharp rock and was torn open. Saint Callistratus came to dry land unharmed, carried by dolphins. Viewing such a miracle, forty-nine soldiers came to believe in Christ. Then the military commander threw Saint Callistratus and the believing soldiers into prison. Before this, all of them were subjected to innumerable floggings.

In jail Saint Callistatus continued to preach the Word of God to the soldiers and he bolstered their spirits for martyrdom. Summoned again before the military commander, the sufferers firmly confessed their faith in Christ, after which they were bound hand and foot and thrown into the depths of a great lake behind a dam. But there their bonds broke, and with bright faces the holy martyrs stood in the water, rejoicing in their Baptism, which coincided with the act of martyrdom.

Beautiful bright crowns appeared over their heads, and all heard a voice: “Be brave, Callistratus, with your company, and come rest in the eternal habitations.” At the same time, the earth shuddered and an idol standing nearby fell down and smashed. Seeing this, another 135 soldiers also believed in the Lord Jesus Christ. The military commander, fearing a mutiny in the army, did not put them on trial, but again imprisoned Saint Callistratus with his 49 companions, where they fervently prayed and gave thanks to the Creator for giving them power to endure such sufferings.

At night the martyrs were cut to pieces with swords by order of the military commander. Their holy relics were buried by the 135 soldiers who remained alive. Later, a church was built on the spot of their sufferings, as Saint Callistatus had foretold.
Troparion — Tone 3

In contest you were strengthened by the Holy Spirit, Martyr Callistratus, / and were glorious in casting down the Enemy. / You offered a noble army of athletes / as sweet-smelling incense to Christ. / With them pray for us who praise you with hymns.
Kontakion — Tone 4

(Podoben: “Today You have shown forth...”)
Like stars you have shone upon the world / shedding the light of your contests and miracles upon all who cry to you: / “Rejoice, Martyr Callistratus and fellow company of martyrs.”
✠✠✠✠✠ 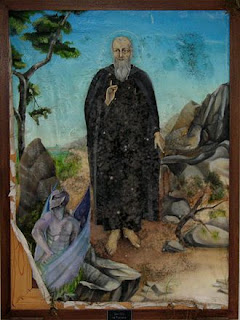 Born to an Italian family of Byzantine rite ("Greek rite") of Rossano, in the Byzantine theme of Calabria, for a time he was married and had a daughter. Sickness brought about his conversion, however, and from that time he became a monk and a propagator of the rule of Saint Basil in Italy.

He was known for his ascetic life, his virtues, and his theological learning. For a time he lived as a hermit, but his reputation drew followers to Rossano, whom he began to instruct. However, after a while, he realized that he was viewed as a local authority, and hearing that there was talk of making him bishop, Nilus fled to Capua, where he stayed for fifteen years. Later he spent certain periods of his life at various monasteries which he either founded or restored. Although Nilus instructed his monks according to the Rule of St. Basil, he maintained cordial relations with the Benedictines at Monte Cassino, where he spent some time, as well as at the Alexius monastery in Rome. The Rule of St. Basil was one of the resources Benedict had recourse to when drafting his own rule.

When Pope Gregory V (996–999) was driven out of Rome, Nilus opposed the usurpation of Philogatos of Piacenza as antipope. According to his disciple and biographer, Bartholomew, in 998 Nilus hastened to Rome to intercede on behalf of a fellow native of Rossano, John Philogathos, who had, against the advice of Nilus, cooperated in an ill-advised scheme of the Roman noble Crescentius to depose the Emperor Otto III's kinsman, Pope Gregory V. Later when Philogathos was tortured and mutilated, Nilus reproached Gregory and the Emperor for this crime, prophesying that "the curse of heaven sooner or later would affect their cruel hearts".

Nilus main works were the foundation in 1004 of the famous Greek monastery of Grottaferrata, near Frascati, on lands granted him by Gregory, count of Tusculum; he is counted the first abbot. At the time Calabria was under Byzantine rule and was Koine Greek in language, culture, and spiritual and liturgical tradition. The abbey continues in the Byzantine rite. He spent the end of his life partly in the Sant'Agata monastery in Tusculum and partly in a hermitage at Valleluce near Gaeta. He died in the Sant'Agata monastery in 1005.

Saint Nilus is revered as the patron saint of scribes and calligraphers.