Another Michaelmas post, with some historic and folkloric notes regarding today's Feast in the UK.

From Historic UK
Michaelmas, or the Feast of Michael and All Angels, is celebrated on the 29th of September every year. As it falls near the equinox, the day is associated with the beginning of autumn and the shortening of days; in England, it is one of the “quarter days”.

There are traditionally four “quarter days” in a year (Lady Day (25th March), Midsummer (24th June), Michaelmas (29th September) and Christmas (25th December)). They are spaced three months apart, on religious festivals, usually close to the solstices or equinoxes. They were the four dates on which servants were hired, rents due or leases begun. It used to be said that harvest had to be completed by Michaelmas, almost like the marking of the end of the productive season and the beginning of the new cycle of farming. It was the time at which new servants were hired or land was exchanged and debts were paid. This is how it came to be for Michaelmas to be the time for electing magistrates and also the beginning of legal and university terms.

St Michael is one of the principal angelic warriors, protector 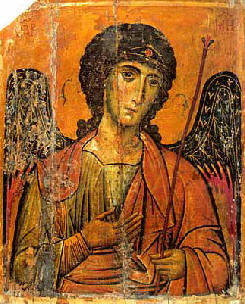 against the dark of the night and the Archangel who fought against Satan and his evil angels. As Michaelmas is the time that the darker nights and colder days begin – the edge into winter – the celebration of Michaelmas is associated with encouraging protection during these dark months. It was believed that negative forces were stronger in darkness and so families would require stronger defences during the later months of the year.

Traditionally, in the British Isles, a well fattened goose, fed on the stubble from the fields after the harvest, is eaten to protect against financial need in the family for the next year; and as the saying goes:

“Eat a goose on Michaelmas Day,
Want not for money all the year”.

Sometimes the day was also known as “Goose Day” and goose fairs were held. Even now, the famous Nottingham Goose Fair is still held on or around the 3rd of October. Part of the reason goose is eaten is that it was said that when Queen Elizabeth I heard of the defeat of the Armada, she was dining on goose and resolved to eat it on Michaelmas Day. Others followed suit. It could also have developed through the role of Michaelmas Day as the debts were due; tenants requiring a delay in payment may have tried to persuade their landlords with gifts of geese!

In Scotland, St Michael’s Bannock, or Struan Micheil (a large scone-like cake) is also created. This used to be made from cereals grown on the family’s land during the year, representing the fruits of the fields, and is cooked on a lamb skin, representing the fruit of the flocks. The cereals are also moistened with sheep's milk, as sheep are deemed the most sacred of animals. As the Struan is created by the eldest daughter of the family, the following is said:

“Progeny and prosperity of family, Mystery of Michael, Protection of the Trinity”Through the celebration of the day in this way, the prosperity and wealth of the family is supported for the coming year. The custom of celebrating Michaelmas Day as the last day of harvest was broken when Henry VIII split from the Catholic Church; instead, it is Harvest Festival that is celebrated now.

St Michael is also the patron saint of horses and horsemen. This could explain one of the ancient Scottish traditions that used to be practiced on Michaelmas Day. Horse racing competitions in the local communities would be held and small prizes won. However, with a twist, it was the only time at which a neighbour’s horse could be taken lawfully the night before and ridden for the entirety of the day, as long as the animal was returned safely!

In British folklore, Old Michaelmas Day, 10th October, is the last day that blackberries should be picked. It is said that on this day, when Lucifer was expelled from Heaven, he fell from the skies, straight onto a blackberry bush. He then cursed the fruit, scorched them with his fiery breath, spat and stamped on them and made them unfit for consumption! And so the Irish proverb goes:

The Michaelmas Daisy, which flowers late in the growing season 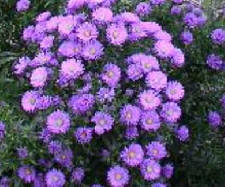 between late August and early October, provides colour and warmth to gardens at a time when the majority of flowers are coming to an end. As suggested by the saying below, the daisy is probably associated with this celebration because, as mentioned previously, St Michael is celebrated as a protector from darkness and evil, just as the daisy fights against the advancing gloom of Autumn and Winter.

“The Michaelmas Daisies, among dede weeds,
Bloom for St Michael’s valorous deeds.
And seems the last of flowers that stood,
Till the feast of St. Simon and St. Jude.”

(The Feast of St. Simon and Jude is 28 October)

The act of giving a Michaelmas Daisy symbolises saying farewell, perhaps in the same way as Michaelmas Day is seen to say farewell to the productive year and welcome in the new cycle.
Posted by Jovan-Marya Weismiller, T.O.Carm. at 12:00