This young man, who gave his life for his country, was from my home town, a member of St Gregory's Parish. We will remember them. Lest we forget! 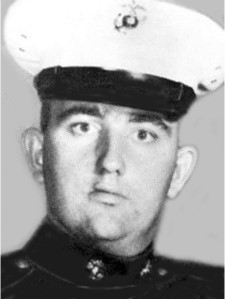 Sergeant Joseph A. Zutterman, Jr. was born 3 October 1944 in Marysville, Marshall County, Kansas. On 20 April 1968, the UH-1E helicopter he was riding in crashed in Quang Nam Province, South Vietnam and he was killed. His remains have never been recovered. His name is on the Honolulu Memorial in Hawaii where the names of the Missing In Action (MIA) from the Vietnam War are listed. There is also a marker for SGT Zutterman at the Saint Gregory’s Cemetery in Marysville, Marshall County, Kansas.
Joseph volunteered for the Marine Corps and received his training to become an NBC (Nuclear, Biological, Radiological) Defense Specialist. SGT Zutterman arrived in Vietnam on 13 January 1967 and assigned to Marine Observation Squadron 2, Marine Air Group 16, 1st Marine Air Wing, III Marine Amphibious Force. He must have voluntarily extended his tour in Vietnam as he had been in country over 15 months when he died and may have been serving as a door gunner. Three helicopters were loitering over the “Operation Foster” area when on a gun run, the helicopter crashed.
SGT Zutterman’s military honors include the Purple Heart, the Air Medal, the National Defense Service Medal, the Vietnam Service Medal, the Vietnam Campaign Medal, and the Combat Action Ribbon (CAR). A bridge in his hometown of Marysville has been dedicated in his name.
Posted by Jovan-Marya Weismiller, T.O.Carm. at 19:44