Today, 19 April 2021, is the 140th anniversary of the death of that great Tory, Benjamin Disraeli, Earl of Beaconsfield, KG, PC, FRS.

Two years after his death, in 1883, a league was formed to advance Toryism as he understood it. It is too bad there are no Tories, as he saw Toryism, left in the so-called Conservative and Unionist Party in Great Britain. Years ago, when it was still a recognisable conservative party in the Tory tradition, I belonged to the Party and to two ginger groups within it.
One was the league founded in Disraeli's honour, the Primrose League. The pledge I took upon becoming a member was as follows:

I declare on my honour and faith that I will devote my best ability to the maintenance of religion, of the estates of the realm, and of the imperial ascendancy of the British Empire; and that, consistently with my allegiance to the sovereign of these realms, I will promote with discretion and fidelity the above objects, being those of the Primrose League.

There were two levels of membership, Knights and Dames of the League and Associates. The official League badge, illustrated below, had the combined letters 'PL' on a stylised primrose, but there were many other badges as well. One, shown below the official badge, incorporated the League motto, 'Imperium et Libertas' (Empire and Liberty), as well as a primrose on a strap and buckle badge, such as clansmen of the Scots clans use.
By 1910, the League had over two million paid up members. However, as the modern age advanced, the Empire came into question, and the Conservative Party began to move away from the Toryism of Disraeli, it began to become less well known and popular. For many years the date of Disraeli's death was called Primrose Day, and a ceremony was held at his statue in Parliament Square, London, when primroses would be placed at the foot of his monument. Here is a short video of one such ceremony.
Primrose Day in London, 1916
(British Pathé)
By the 1970s, the League had dropped all references to the Empire in its principles, without replacing them with a corresponding mention of the Commonwealth, which must have caused the great Imperialist, Disraeli, to turn in his grave at Hughenden, near High Wycombe, Bucks. It had also added a reference to the 'Conservative cause' which by then had little or nothing to do with the High Toryism of Lord Beaconsfield.
As published in the Primrose League Gazette, vol.83, no.2, March/April 1979) they were:
I had long since ceased to be a member of the Party or the League, feeling not that I had left Toryism, but that the Party and the League had  abandoned the principles of the great man in whose honour the League had been founded.
Here is a picture, from the Tate Museum, entitled 'Primrose Day', that captures the feeling of the early days of the League. The lass has been collecting primroses, with some in her hat and a bouquet in the vase on the table, and a picture of Lord Beaconsfield on the wall.
Primrose Day
Frank Bramley (1885)
Tate Museum 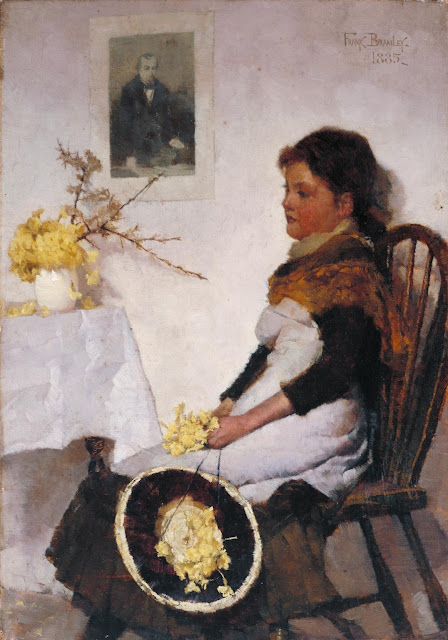