I Hate to Be Accusatory, but Either This Bishop Is an Apostate or He Is a Liar and if a Liar and Not an Apostate, Is He Shismatic?

Bishop Bätzing's 'theology' stinks worse than the cheese named for his See City, Limburg! Pray for his return to the Catholic Faith. I do.

A wolf in a shepherd’s liturgical vestments: 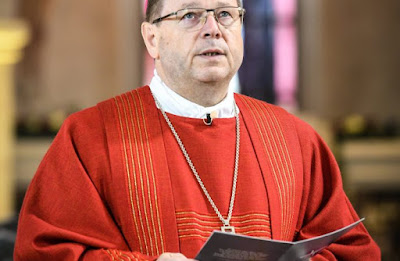 This German bishop is a liar in the sense he calls himself a “conservative” but espouses the liberal, gnostic policies of Protestantism. He is actually a neo-Protestant and may well lead the Church in Germany into another reformation. Recall that the first reformation did so much for the unity of the Church.

Maybe though, if Germany has yet again a Protestant Reformation, maybe the True Church will have another Counter Reformation with the world’s bishops meeting in Trent (Torrino) for Trent II! And maybe Trent II will make Trent I look like child’s play.

Read the headline and then press it for the article and scratch your head and then ask the bishop, “how stupid do you think orthodox Catholics are?” He’s a Gnostic.

Just a few of the things he is advocating: blessing of same sex unions and sexual unions of a variety of kinds, thus removing any sense of original or actual sin connected with any type of sexuality.

He asks for the ordination of women deacons and priests.

That’s only the half of it. And he criticizes the progressive stances of the Vatican under Pope Francis; interesting, no?

But let me ask this question, given the gay lobby in society and the Church, is there a way to make sinful homosexuals feel welcomed attending Mass? We make sinful heterosexuals welcomed. Of course within orthodox Catholicism, if a person is in a state of mortal sin, they should not receive Holy Communion until they have repented and received Sacramental Absolution. Some heterosexuals who live in sin or are a civil marriage not recognized by the Church because of a previous Sacramental marriage, are banned from receiving Holy Communion and some ministries. Heterosexual couples living in sin are not banned from attending Mass but are banned from receiving Holy Communion.

If you had a gay son in a civil marriage how would you treat him and how should the Church minister to him. Is the Gnostic bishop in Germany the way to go?