/Satire/ Becciu Gets the Sack /satire/

Eccles has a bit of fun with Cardinal Becciu's resignation, which is probably in advance of indictment for financial corruption.

The phone rang. "Headmaster wants to see you, Eminence," said Gonzalo Aemilius, the Pope's personal secretary. "Better stick some books down the back of your cassock, you're in for a caning."

Cardinal Giovanni Becciu, Prefect of the Congregation for the Causes of Saints, cautiously entered the Pope's study, known colloquially as the Awful Office. Was the Headmaster going to tick him off for recommending Ruth Bader Ginsburg for canonization on the advice of James Martin, Massimo Faggioli, and several others who had the Pope's ear? Or was it something else? 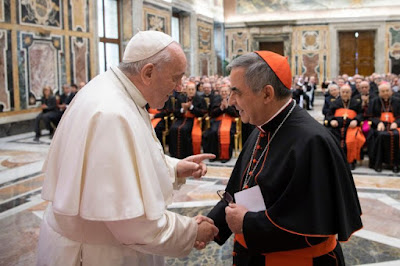 No, Cardinal, I really can't accept your cheque while people are watching."

"I have here a letter from the Count of Monte Ballarat," said the Pope. "In fact it's really Cardinal Pell, the man imprisoned in the Château Wallaby for fifteen years on trumped-up charges. He has now escaped and is starting to take revenge on the people who betrayed him. I'll Becciu weren't expecting that! (Joke!)"

"But why does he use the alias 'Count of Monte Ballarat'?" asked Becciu.

"He knows very well that my secretary has orders to tear up all letters from cardinals on sight. We don't want any more Dubia slipping through! Now, Pell was looking into the finances of the Vatican before he was sent away, and has laid some very severe charges against you." 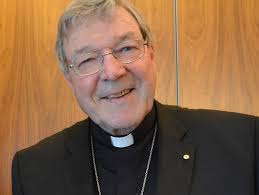 Cardinal Pell is deeply grieved by the downfall of Becciu.
"Does he know about my private company Vatican Embezzlement Inc.?"

"More than that. He has been following the money, and knows that it is wholly owned by Becciu Slushfunds, which in turn is a shadow company that sends money to Becciu Investments, and this in turn funnels its profits into Becciu Laundries and Dry Cleaning. It seems that all you launder is money..."

"It's just accounting, Holy Headmaster, you wouldn't understand it." 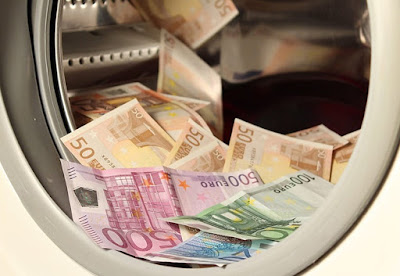 Suspicious going-on in the Vatican laundry.

"I'll have to do something about this you know. Apparently all the newspapers have been carrying the story for over a year, except the ones I read: La Civiltà Cattolica, The National Catholic Reporter, America, the Tablet and the Beano. You're FIRED!"

"Hand over your red hat and your key to the Cardinals' washroom. Cardinal Cocainepusher wants me to tell you that you're not invited to any more Saturday night parties. Gammarelli's will no longer be giving you a staff discount."

"Can I keep my email business, sending messages to gullible people offering them a million euros if they let me use their bank account?"

"Yes, no problem, Giovanni. And don't worry - I'm going to commission a full report on the whole affair, but it's in a queue after the McCarrick report, so you're all right for ten years or so."

"Just one thing though... the Count of Monte Ballarat says that there are more people he wants to expose, including FATHER BIG, himself. Do you think he knows about that money we've been getting from Soros and Xi Jinping?"