Please! Say this prayer frequently, in Latin, in English, or in whichever language you like, but pray it to ask Holy Michael's aid in these dark days for the Mystical Body of Christ and the World!

This prayer was composed by Pope Leo XIII after he experienced a horrifying vision. On October 13, 1884, while consulting with his cardinals after Mass, Pope Leo XIII paused at the foot of the altar and lapsed into what looked like a coma. After a little while the Pope recovered himself and related the terrifying vision he had of the battle between the Church and Satan. Afterwards, Pope Leo went to his office and composed this now famous prayer to St. Michael the Archangel and assigned it to be recited after Low Mass, a position it occupied until Vatican II. 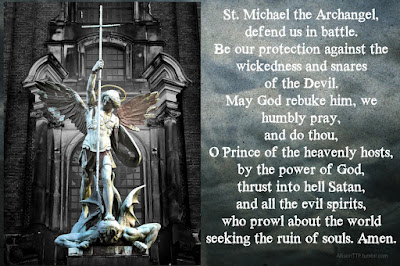