This is what they do first. Next it's Priests and nuns to the firing squad or guillotine. After that, it's the general persecution.

According to a news release, the man was seen around 10 p.m. walking up to a dormitory building in the 2600 block of West Woodlawn Avenue and repeatedly striking the glass doors at the Discernment House.

By the time police arrived, the man was gone, the news release said. 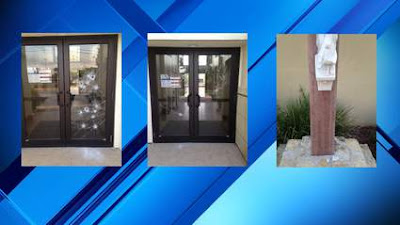 A man armed with a baseball bat damaged five glass doors and an outdoor crucifix at the San Antonio Archdiocese Assumption Seminary. (KSAT)
In addition to the shattered doors, a jersey was found around the head of the crucifix and one of the feet was broken. No injuries were reported.

“First and foremost, all of our seminarians and all the people at the seminary are safe,” seminary rector Father Hy Nguyen said. “We ask for your prayers for this misguided person, and for the safety of the Assumption community.”

The seminary is where men are trained to become Catholic priests.
Posted by Jovan-Marya Weismiller, T.O.Carm. at 14:54