I have attended Mass in his home Parish, of which he was Administrator for a short time, and met people who knew him. May he be declared Venerable soon! 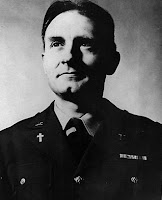 Father Emil Joseph Kapaun was a chaplain in the US Army and served in the Korean War. During the Battle of Unsan in 1950, he was captured and taken to a prisoner of war camp. There, he dug latrines, mediated disputes, gave away his own food, and raised morale among the prisoners. He also would steal coffee and tea from the guards, led fellow prisoners in acts of defiance, and smuggled dysentery drugs to the doctor. In May of 1951 he died of pneumonia and malnutrition, and was later posthumously awarded the Medal of Honor in 2013.
In 1993, Pope Saint John Paul II named Kapaun a Servant of God. Now, a panel of archbishops and cardinals from the Vatican’s Congregation for the Causes of Saints will meet on March 10th to vote on whether Kapaun should be named Venerable.
Kapaun’s home Diocese of Wichita compiled a 1,066 page positio containing 14 years of research on his life. In 2016, a historical committee from the Congregation for the Causes of Saints accepted the findings of the positio, and in 2018 a theological committee accepted the findings as well.
The committees accepting the positio brought about the vote that will determine if Kapaun can be named Venerable. Father John Hotze, the episcopal delegate for the beatification campaign, said of Kapaun’s cause for canonization:
“It may seem that Father Kapaun’s Cause for Canonization is taking an extremely long time. Although, when you think of the magnitude of what naming a person a Saint really means, it really has not been that long of a time. When one is named a Saint, the Church is stating that the Church has no doubts that this person is with God in heaven. That is quite the statement and one that should not be taken lightly. In an official capacity, we have been working on Father Kapaun’s cause for just twelve years. Historically speaking, it is not unusual for causes for sainthood to take tens and even hundreds of years.”
Read below the Medal of Honor citation for Captain Servant of God Emil Joseph Kapaun:
“Chaplain Emil J. KAPAUN distinguished himself by acts of gallantry and intrepidity above and beyond the call of duty while serving with the 3rd Battalion, 8th Cavalry Regiment, 1st Cavalry Division during combat operations against an armed enemy at Unsan, Korea, from November 1–2, 1950. On November 1, as Chinese Communist Forces viciously attacked friendly elements, Chaplain KAPAUN calmly walked through withering enemy fire in order to provide comfort and medical aid to his comrades and rescue friendly wounded from no-man’s land. Though the Americans successfully repelled the assault, they found themselves surrounded by the enemy. Facing annihilation, the able-bodied men were ordered to evacuate. However, Chaplain KAPAUN, fully aware of his certain capture, elected to stay behind with the wounded. After the enemy succeeded in breaking through the defense in the early morning hours of November 2, Chaplain KAPAUN continually made rounds, as hand-to-hand combat ensued. As Chinese Communist Forces approached the American position, Chaplain KAPAUN noticed an injured Chinese officer among the wounded and convinced him to negotiate the safe surrender of the American Forces. Shortly after his capture, Chaplain KAPAUN with complete disregard for his personal safety and unwavering resolve, bravely pushed aside an enemy soldier preparing to execute Sergeant First Class Herbert A. Miller. Not only did Chaplain KAPAUN’S gallantry save the life of Sergeant Miller, but also his unparalleled courage and leadership inspired all those present, including those who might have otherwise fled in panic, to remain and fight the enemy until captured. Chaplain KAPAUN’S extraordinary heroism and selflessness, above and beyond the call of duty, are in keeping with the highest traditions of military service and reflect great credit upon himself, the 3rd Battalion, 8th Cavalry Regiment, the 1st Cavalry Division, and the United States Army.”
Posted by Jovan-Marya Weismiller, T.O.Carm. at 14:38

What Catholics Once Were....