What religion claims a 'freedom' to murder the unborn or to kill already born infants?

The New York senator railed against President Trump and Mitch McConnell but failed to explain what late-term abortion has to do with religious freedom.

WASHINGTON, D.C., February 27, 2020 (LifeSiteNews) – Prior to Tuesday’s failed Senate votes on legislation to ban late-term abortion and require basic medical care for abortion survivors, Sen. Kirsten Gillibrand, D-New York, chose an unusual direction from which to attack the measures.
The Senate voted 56-41 in favor of the Born-Alive Abortion Survivors Protection Act, which would require abortionists to transfer infants who survive abortions to hospitals, where they would be given the same degree of care as any wanted newborn. It also voted 53-44 in favor of the Pain-Capable Unborn Child Protection Act, which would ban most abortions starting at 20 weeks (or five months) into pregnancy (by which point science indicates preborn babies are capable of feeling pain). Neither bill passed, however, as the Senate’s current filibuster rules require 60 votes for most types of legislation.
“This is part of President Trump and Mitch McConnell’s all-out assault on women,” Gillibrand declared on MSNBC. “They’re trying to harm women. They’re trying to take away their civil rights, their human rights, their ability to make the most important, intimate decisions of their lives. They’re taking away their religious freedom. They’re taking away their moral freedom.”
Gillibrand did not elaborate on how there could be a “religious freedom” to abort one’s child or starve a newborn to death, but she has previously suggested that banning abortion goes against “free will” and the “separation of church and state.” Like many “Christian” abortion defenders, she did not address how the Bible’s multiple prohibitions on “spilling innocent blood” factor into her moral calculus.
“These two measures that we’re voting on literally changes the landscape of how we treat a baby who was born, who cannot survive outside the womb and how those parents want to be able to have those final moments with their child,” she continued. “It is a horrible, horrible choice by Mitch McConnell to force these votes, and we’ve voted on these measures before and they’ve lost. I think this is just a political ploy to satisfy those who are attending the CPAC conference.”

.@SenGillibrand on the Senate taking up the Born-Alive Abortion Survivors Protection Act: An “all-out assault on women” 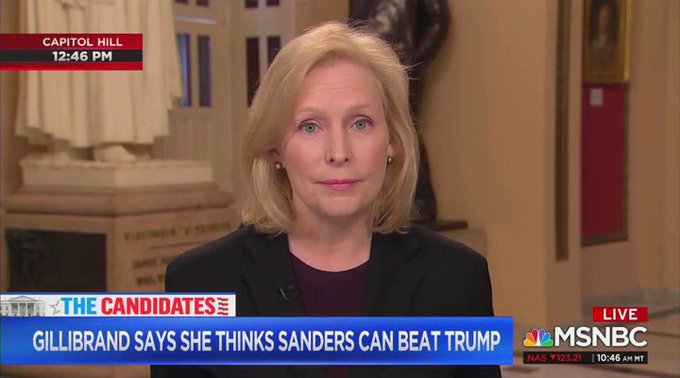 627 people are talking about this
“Sen. Gillibrand is going right to the fetal abnormality argument, which is telling,” Clash Daily associate editor K. Walker wrote in response. “She refuses to acknowledge that late-term abortion is mostly done for the convenience of the mother. Even the pro-abortion Guttmacher Institute study shows that the vast majority of women that choose to abort after 20 weeks are making the decision for the same reasons as the ones choosing to abort before 12 weeks.”
Gillibrand, who briefly competed in the Democrat presidential primary, holds 100 percent pro-abortion ratings with Planned Parenthood and NARAL; has called the prospect of the Supreme Court overturning Roe v. Wade and letting states decide their own abortion laws “literally the biggest civil rights issue, certainly in my lifetime, for women”; and defended Planned Parenthood while refusing to watch the undercover videos revealing its sale of aborted baby parts.


During her presidential campaign, Gillibrand also claimed the rightness of legal abortion is an issue that has attained “such moral clarity that we have as a society decided that the other side is not acceptable,” and that appointing a pro-life jurist would be on par with “saying that it’s OK to appoint a judge who’s racist or anti-Semitic or homophobic.”
Posted by Jovan-Marya Weismiller, T.O.Carm. at 15:11