Sadly, it's satire, but it's quite funny!

Rumours circulating in the Vatican were confirmed today, when Pope Francis finally announced his resignation. "My work here is done," he said. "I have united the Catholic Church, sorted out China, put Catholic doctrine on a firm and unambiguous basis, cleared up all the questions of the Vatican finances, got rid of all the perverts and junkies, and in general ushered in a new era of Catholicism. In conclusion I would like to state infallibly and ex cathedra that... aaargh!"

The "aaargh" is not a new piece of doctrine, but was the result of a mass rush onto the dais when it was feared that the Holy Father might say something incredibly stupid ex cathedra, rather than, as is usual, ex aeroplana or ad Scalfarium. 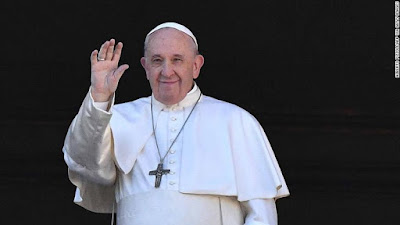 So Francis fades into obscurity, having vowed to spend his declining years in (a) learning how to pray; (b) writing his memoirs to correct the errors of Austen Ivereigh; and (c) trying to chase up that Chinese pilgrim whom he impatiently slapped... "so that I can give her a real walloping". Now we have a Pope Emeritus Senior and a Pope Emeritus Junior, and the question is: who will be next?

Well, it can't be Cupich (too heretical), Marx (too fat for the chair of Peter), Tagle (too pathetic), Sarah (too African), or Burke (too American). So here is our hot tip:

Cardinal Saito has been hiding in the Burmese jungle since the 1960s, and has never heard of Vatican II. When he first went there as a young priest, all Masses were in the extraordinary form, clerical sex abuse hadn't been invented, men were real men, and popes were real popes (or at least as real as John XXIII). Owing to a clerical error, Saito was raised to the College of Cardinals by Pope John-Paul II, even though nobody had heard of him for 40 years. 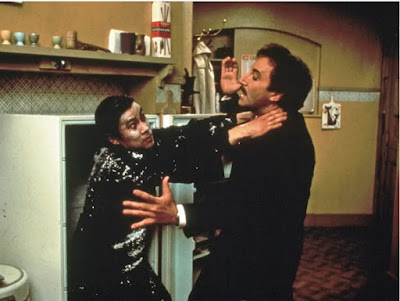 The Cardinal who came in from the cold: Saito smites a heretic.

Support for Saito is gathering among all sections of the College of Cardinals, as someone who can start the Church off with a clean sheet, and who is totally uninfluenced by Freemasonry, Liberation Theology, Modernism, Feminism, Wokeness, etc. If elected, he will restore everything in the Church to how it was in 1960. Of course his habit of running around with a machete, shouting, "Kill the heretics" is not likely to endear him to everyone. Still, you heard it here first. Look out for Pope Goliath!
Posted by Jovan-Marya Weismiller, T.O.Carm. at 14:46