More on the desecration of the Holy House of Loreto with a protestant 'communion table'. I would argue only with the author's statement that the Holy House 'is the historically most important place of pilgrimage of the Catholic world'.

I would say that both the Church of the Nativity in Bethlehem, and the Church of the Holy Sepulchre in Jerusalem are more important. I assume the Italian author's national pride had a bit to do with his description.

From the Eponymous Flower 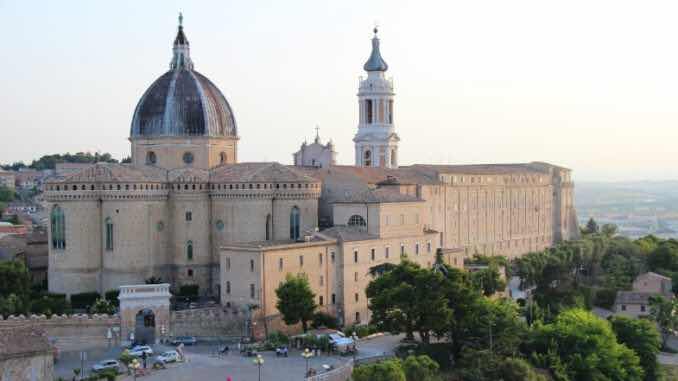 The Laurantanian Basilica of the House of Loretto

(Loreto) "What do you do to avoid celebrating ad orientem?" With these words, the traditional website Messa
in Latino commented on the "table" that was set up in the Santa Casa, in the Holy House of the Annunciation of the Angel to Mary.

In this way, the celebration of the Novus Ordo with the back to the east and the image of grace becomes possible.


"There has never been anything like that in the Holy House!"

The reason claimed for the transformation were apparently the  "necessities" for the depiction of the Mass at the TV station TV2000, which is owned by the Italian Episcopal Conference.


"What is scandalous for believers watching TV2000 in showing them the direction of celebration as it has been for centuries in the Holy House?"

So far, no criticism by believers in this regard has become known. It is therefore rather the responsibility of TV2000, "who do not like that in the Holy House of Loreto the doctrinal provisions on celebration were observed," said Messa in Latino.

Among other things, Joseph Cardinal Ratzinger, the later Pope Benedict XVI, celebrated several times (1988, 1991, 1999 ...) in the Santa Casa and in each case ad orientem.”  In 2000, the Roman Congregation for Divine Worship and the Order of the Sacraments clarified that:


"It would be a grave mistake to think that the main direction of sacrifice is to the celebrating community ... the spiritual attitude (of the celebrating priest) must always be the representative of the whole Church versus the divine Jesus Christ". 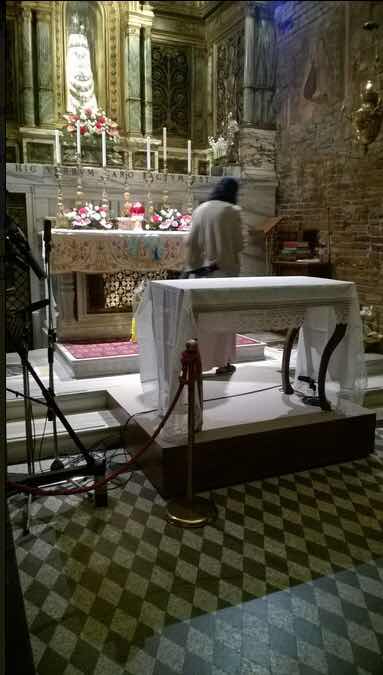 The new "table" in the Holy House of Loreto

The new "table" in the Holy House is not the first intervention in the famous pilgrimage church. In 2010, the Tabernacle and the Holy of Holies were removed from the Santa Casa. The reason given for the move was the growing number of tourists who would not enter the house as pilgrims. However, this made the house of Mary a kind of "museum".

In addition, at the turn of the year 2017/2018, the pews were replaced in the basilica. The meaning of this action is explained to the faithful only with "rennovation mania." There were pews before that, too. The difference between the old and new pews is that the new ones have no more knee benches. The faithful people, who are in the majority flocking to pilgrimage, have to “toss out" kneeling, says Messa in Latino commenting at that time. A signature petition of believers did not succeed. The incumbent prelate of the basilica points out that the decision to purchase the new pews was made shortly before his appointment in May 2017. Now they are just there, and you can not change that anymore.

Historically the most important place of pilgrimage in the Catholic world

The sanctuary of Our Lady of Loreto, also known as the Lauretan Basilica, is located in the Italian Marches and is the historically most important place of pilgrimage of the Catholic world. Since the end of the Crusades there is the house of the Holy Family of Nazareth. In this house the angel announced to Mary the Incarnation of God. While the house has been in Loreto for about 750 years, the foundations of the house can be seen in the Annunciation Basilica of Nazareth. 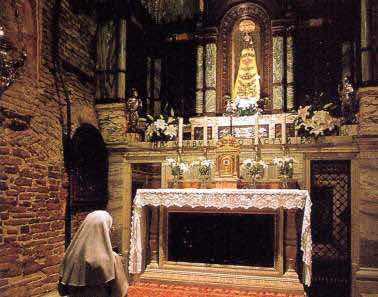 The Holy House before the removal of the Tabernacle (2010)

Today's pilgrimage church towers like a divine castle on a ridge and offers an impressive view of the Adriatic Sea. It dates from the 15th century. The magnificent facade was begun in 1571. A fateful year. In the Battle of Lepanto south of the Adriatic, Christians were able to defeat the Turkish fleet and thus stop the Islamic advance on Europe, at least at sea. In gratitude for the victory, the Christian commander in chief, John of Austria (Don Juan d'Austria), Marcantonio Colonna and Sebastiano Venier, released their galley prisoners who had been sentenced to rowing on ships for crimes. For their part, these pilgrims made a pilgrimage to Maria Loreto and brought their galley chains as a gift to the Blessed Mother. From them were forged the great church grates, which can still be admired today in the basilica.

The place is so important that the great nations and linguistic spaces have donated chapels in it, so there is a French, Slavic, American, Polish, Spanish and also a German chapel.

Popes and saints visited the sanctuary, among the younger ones were St. Therese of Lisieux and St. Gianna Beretta Molla.

But nothing seems to be safe from the rage of innovation.

What Catholics Once Were....