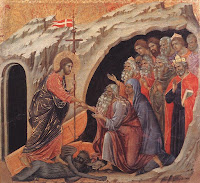 Today, until the Vigil Mass of Easter this evening, is one of the saddest days in the Liturgical Calendar, surpassed only by yesterday when we celebrated the Passion of Our Blessed Lord and Saviour. It is on this day that we remember His Descent into Hell as we say in both the Apostles' and Niceno-Constantinopolitan Creeds. He Descended into that region of hell known as the Limbus Patrum or Limbo of the Fathers, where the souls of the just reposed. These were the souls of all those who had lived just lives, worthy of salvation, before the Crucifixion and Resurrection of Our Blessed Redeemer.

One of my all-time favourite poems deals with this. It is 'Limbo', by Sister Mary Ada. I have posted it since it is very appropriate for today.

On this day, Our Blessed Mother was truly Our Lady of Sorrows, and the Apostles and other Disciples of Our Lord sorrowed with Her. Can you imagine hoe abandoned they must have felt?

As I noted yesterday, only the Sacraments of Baptism (in danger of death) and Penance are licitly celebrated today. Holy Mass is not celebrated on this day until the Vigil Mass of Easter, which under Paschalis Sollemnitatis, On The Preparation an Celebration of Easter, given by the Sacred Congregation for Divine Worship on 16 January 1988, starts after night-fall.


1. The Meaning Of The Nocturnal Character Of The Easter Vigil

78. "The entire celebration of the Easter Vigil takes place at night. It should not begin before nightfall; it should end before daybreak on Sunday." This rule is to be taken according to its strictest sense. Reprehensible are those abuses and practices which have crept into many places in violation of this ruling, whereby the Easter Vigil is celebrated at the time of day that it is customary to celebrate anticipated Sunday Masses.

Those reasons which have been advanced in some quarters for the anticipation of the Easter Vigil, such as lack of public order, are not put forward in connection with Christmas night, nor other gatherings of various kinds.

In the Eastern traditions, the great Vigil Liturgy of Easter begins with a procession round the Church 'looking for the dead Christ', a very moving experience. In one Eastern Parish to which I belonged, the Church was on the top of a steep hill. The back of the Church was built almost to the edge of a steep drop of around 20 feet. The procession became an occasion of physical danger for the participants because it was easy to misstep in the dark, especially if one was a banner-bearer!

Tonight, after attending the glorious and joyous Vigil Mass, I will return home to my traditional Easter dinner of kubasa, sauerkraut, and potatoes. Since it's not worth the work of making a paskha just for myself, dessert will be a cheesecake. When I was Orthodox, I attended Divine Liturgy in a Slavic enclave in Kansas City, KS. On Holy Saturday, you could smell the kubasa and kraut cooking all over Strawberry Hill in the afternoon, as families prepared the Easter feast for when they returned from the Vigil.

But, if you desire to be totally Slavic and traditional, here is a recipe for paskha.