I'm going to pin this to the top of the blog for the rest of the month, until Easter. Remember that Traditionally, Holy Saturday is a day of Fast and Abstinence!

And we think we have it tough! I abstain from meat every day in Lent that is not a Sunday or a I Class Feast. Also, even tho' I'm no longer bound to fast because of my age, I fast (using the 'modern', pre-Conciliar rules) on every Wednesday and Friday of Lent. I doubt I get much spiritual benefit from the fasting, however. Due to a wonky metabolism, I fast most other days of the year, as well. I'm not hungry in the morning, so I seldom eat breakfast. Since I'm a night person who sleeps into the late morning, breakfast and lunch tend to fall by the wayside. I eat a hearty supper, and then before bed, I have a light snack. Alas, the paucity of my meals seems to have no effect on my weight! 😄

Ihave been told that medieval Christians would ridicule the Islamic season of fasting called Ramadan as weak, effeminate, and easy when compared to the austere Christian season of fasting during Lent or Quadragesima.
The Catholic Church has decreased the austerity of Lent over the centuries so much that Islamic Ramadan now appears as more challenging than Lent. Let’s take a look at Ramadan compared to Medieval Lent. 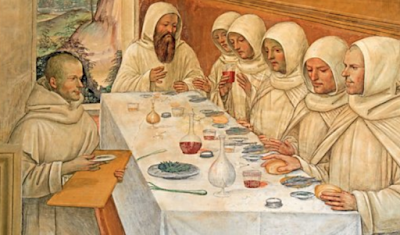 Rules for Medieval Quadragesima or “Lent”:

Nota bene: I’m using the standards of the Roman Church. The Eastern Churches have had various disciplines by jurisdiction. For this article, we are focusing only on the Roman rules. Perhaps we’ll study the Eastern fasting rules in a future post.

For the Medieval Christian, he would have seen the chief difference between Lent and Ramadan as the Muslims having a “reset” every single night with refreshment with food and sex every 24 hours. Whereas the Christian had to wait until Easter. The Muslim had daily sprints. The Medieval Christian had a marathon that ended on Easter.
You can leave a comment by clicking here.
So could you do it? No sex, butter, or bacon for 46 days? No food daily till 3pm? Leave a comment and tell me what you think about this old Lenten rules. Is it good or bad that changed them?

You can leave a comment by clicking here.
Posted by Jovan-Marya Weismiller, T.O.Carm. at 23:58