A look at a very unpopular Prince of Monaco, viewed by many as a sort of usurper. 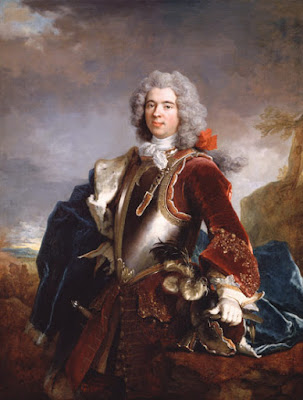 One of the more controversial men to hold the title of Prince of Monaco was Jacques Francois Leonor Goyon de Matignon. It will be noticed that his name was not Grimaldi and that would be a hurtful point to many. On October 20, 1715 he married Hereditary Princess Louise-Hippolyte of Monaco, daughter and successor of Sovereign Prince Antoine I after a long and contentious search for a suitable husband. Part of the appeal of Jacques was that he was not so well born as to be reluctant to change his name. Unfortunately this would also mean that he would be tainted from the start with the image of a social-climber. Still, his own family was fairly prestigious as well, coming from one of the oldest families of Brittany. One of his ancestors was the famous Marshal Jacques de Matignon who refused to participate in the notorious Saint Bartholomew’s Day Massacre.

Many other members of the larger Grimaldi clan were adamantly opposed to the marriage of Louise-Hippolyte and Jacques de Matignon. They argued, not unreasonably, that according to previous accords the Monegasque throne should only pass to a Grimaldi and that by the marriage Jacques would become the effective ruler of the principality and the founder of a new dynasty in all but name. They tried to pursue the matter through legal means but to no avail and thereafter many took to referring to the Monegasque Princely Family as the House of Matignon rather than Grimaldi. Nor was the Princess of Monaco herself happy with her husband whom she viewed, because of all the intrigue surrounding the marriage, with great suspicion, suspecting that he was only using her to advance his own position. Her fears were not unreasonable as Jacques was attracted to the marriage because he would be gaining a principality rather than any real devotion to the Princess and the match was pushed by King Louis XIV of France who wanted to secure French influence over Monaco and he knew that Jacques would be “his man” as it were. 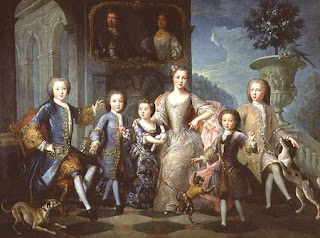 Princely Family of Monaco
In 1731, with the death of Antoine I, Prince Jacques became “Sovereign Consort” of Monaco and thought of himself as the real ruler of the place and this was another example of what Princess Louise-Hippolyte regarded as her husband assuming more power than was his right and attempting to usurp her legitimate place as Sovereign Princess of Monaco. Nonetheless, throughout their marriage the line of Prince Jacques I was secured by the birth of eight children from 1717 to 1728. When the couple came to the throne the people of Monaco welcomed their Princess but scorned their new Prince who they saw as acting arrogantly and really caring nothing for the people but only about what he could gain from the Principality. Even before assuming the throne he avoided Monaco and preferred to stay with the French court at Versailles enjoying a succession of mistresses. The marriage of Grimaldi and Matignon was not a happy one.

Prince Jacques I was the effective ruler of Monaco, especially after Princess Louise-Hippolyte died of smallpox only eleven months into her reign. With no more opposition Jacques I was able to assume total control of Monaco and was recognized as the Sovereign Prince by the King of France. However, his reign would not be a peaceful one even after the passing of his wife. Her fight was taken up by her sister Princess Margaret d’Isenghien who conspired against Jacques on the grounds that the Monegasque had always been ruled by a Grimaldi and would accept nothing else. To deal with this Prince Jacques appointed the Chevalier de Grimaldi (an illegitimate son of Antoine I) to be Governor of Monaco. Fortunately the Chevalier proved to be a wise administrator and ruled Monaco with great ability for the next 50 years. It was certainly an improvement over Prince Jacques who never showed much interest in Monegasque affairs and was generally unpopular. He preferred the high life of the French court to the business of governing his little Principality. Finally, with public opposition to his rule showing no signs of letting up he left Monaco in May of 1732 and the following year abdicated in favor of his son Prince Honore III. The new Sovereign Prince was barely 14 but with the Chevalier running things the country seemed to be in capable hands with good prospects for the future. Prince Jacques returned to his favored lifestyle in Versailles and Paris where he spent the rest of his life before his death on April 23, 1751. His former residence in Paris, named the Hotel Matignon is today the official residence of the French prime minister.
Posted by Jovan-Marya Weismiller, T.O.Carm. at 00:30