De Mattei: Our Dead: A Legion of Souls Sustaining Us in the Battle

Let us petition the Poor Souls to join us in battle. 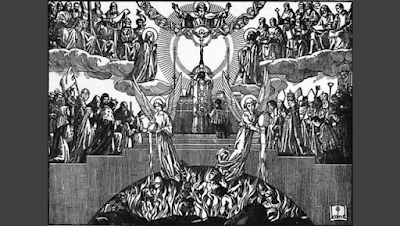 As the years go by, the number of those we have known and who have left this earthly life before us increases. What will their eternal destiny be? Only God knows the ultimate destiny of souls, but it is sure that a great number of those who died in a state of grace suffer the pains of Purgatory, in anticipation of the definitive glory of Heaven. These souls are part of the Church Suffering which, together with the Church Militant and Triumphant, form the one Church of Christ. Indeed, as St. Augustine says, “Tota enim in Christo Ecclesia unum corpus est” (Enarr. In Ps,  148, PL, 51, 423): “the entire Church forms one body in Christ”.

The Mystical Body of Christ is the foundation of the Communion of Saints comprised of three churches: The Militant, The Suffering and The Triumphant, formed respectively by those fighting on earth, those being purified in Purgatory and those triumphant in Heaven. This Civitas Dei battles against the civitas diabuli, which has no purgatory, but is formed only of the damned and those militant on earth in the armies of  Satan against the armies of Christ.


The Church then, together alongside the Angels and Saints of Heaven, deploys a legion of Holy Souls in Purgatory, who can exercise a decisive role in this battle. They cannot do anything for themselves, yet they can do a lot for us, through their intercessory  prayer.

St Augustine explains how the departed don’t know about human things the instant they occur, but can know about present, past and future events through Divine revelation or through the Angels or the souls that join them after leaving this world.  The departed thus take part in earthly events, not by their nature, but by virtue of Divine power. God is the means through which we can reach the departed and through which they can reach us (Mons. Antonio Piolanti, Il mistero della comunione dei santi, (The Mystery of the Communion of Saints), Desclée, Roma 1957, pp. 317-318).

St Gregory the Great, to whom we owe the providential use of “the Gregorian Masses” recounts in his Dialogues, visions and episodes wherein the souls of the departed ask for suffrage and make us understand that it is by these means they are freed from their pains. St. Thomas, in 14 articles of  question 71° in the Supplement to the Summa Theologica, explores everything on the question of suffrage. After proving their existence by means of Holy Scripture, the Fathers, the customs of the Church and arguments of reason, he explains that among those who have passed into eternity, only the suffering souls can be helped by our suffrage. These souls, in fact, not having yet reached their final end, are in a certain sense, still in a state midway. The living can help them ‘serve their time’ and hence pay their debts to Divine justice. The Holy Mass, almsgiving, prayers and indulgences are the practical means by which we sustain these suffering souls.

The Souls in Purgatory are souls confirmed in grace, sure of their eternal salvation, who suffer, but accept their suffering with joy. “The soul suffers as the saints suffer on earth, in complete union with the Divine Will and, we may say, is full of joy for every fault that is purified by the painful fire, which heightens its love and yearning  for God, Infinite Love” (Don Dolindo Ruotolo, Chi morrà vedrà…Il Purgatorio e il Paradiso, Casa Mariana, Frigento 2006, p. 42).

Purgatory is not only a “state” but, like hell, is a “place” and the fire tormenting the souls is not an allegorical fire, but real. Those who deny the existence of Purgatory, as St. Thomas has previously stated against the heretics of his time, “go against the authority of the Church and incurs heresy” (IV Sent., d. 21, q. 1, a. 1, sol. 1).

From earliest times, the faithful have always had a vivid belief in the intercession of the souls in Purgatory. In 1891, at Santa Sabina in Rome, an epigraph  was found that said: “Attico, rest in peace, certain of your salvation; and pray with solicitude for our sins”; another inscription in the Cemetery of San Callisto, says: “Ianuaria, enjoy your respite and pray for us”.

From the very beginning the Church has prayed for the liberation of the dead from the pains of Purgatory. Thus the Catechism of  St. Pius X affirms that the Saints receive our prayers, the deceased our suffrage and they return our love by their intercessions to God (n.123).

Every time we ask someone to pray for us or assure them of our prayers, we are affirming a great truth of the Faith: the Communion of saints. Our supernatural goods  can be communicated to others, just as the goods of God are communicated to us. For this it is important to ensure the protection and help of the Souls in Purgatory. They are grateful for this, and their incessant prayers obtain for us enormous benefits, as much for our spiritual life as for our corporeal life.

We must pray not only for those who have been near and dear to us, but also for those that have misunderstood, calumniated or fought against us. For if they died in a state of Grace, they are now living in Divine charity. If yesterday they opposed us, today they love us, and we must love them, since the law of the Mystical Body is Charity. Leo XII, in his encyclical, Mirae Caritatis, of May 28, 1902, writes: “The Communion of Saints is nothing other than the reciprocal communication of aid in atonement, in prayers and good works, among the faithful who delight in the Heavenly Country with those in the flames of expiation and those still on the earthly pilgrimage: all of them form one City, the Head of which is Christ, the form of which is Charity”. The Church is the union of all the people connected to each other by one and the same Charity. It is Charity, Christian love, that creates a relationship of solidarity and interdependence among us and our brethren, forming the one Mystical Body, under the one Head: Jesus Christ.

The bond of Charity is not broken by death and now unites the defenders of ‘the good cause’ who are resisting the army of evil, now infiltrated even in the Holy Place.  Alongside the Choirs of Angels, let’s invoke the help of souls, who, even if they didn’t go to Heaven immediately, had nevertheless, the immense gift of final perseverance, and despite being amid sufferings, are certain of their eternal salvation. Let’s ask their intercession so that the Lord also grants us the gift of perseverance in this battle, and most of all in the last moment of our life.

St. Augustine doesn’t even rule out the possibility that some of the Holy Souls are sent among the living (De cura pro mortuis gerenda, 15, 18; PL 40, 605-606).Queen Claudia of France, wife of Francis I, after her death at the young age of twenty-four, on July 20th 1524, appeared more than once to Blessed Catherine of Racconigi, telling her of the French invasion of Italy, the defeat and capture of her husband and finally, his liberation, thanks to the prayers of the Saint (Pier Giacinto Gallizia, Vita della ven. suor Caterina de’Mattei, chiamata la B. Catterina da Racconigi, Mairese, Torino 1717, p. 101).  It is not an isolated case. God may permit a soul triumphant in Heaven, or one suffering in Purgatory to render themselves visible on Earth so as to encourage the sons and daughters of the Church Militant. This may even happen in the course of future trials.

Souls still in need of purification, of whom many defended the Church in theological disputes or on the fields of crusades, now, by their suffering and prayers sustain those who continue fighting the battle against the ancient enemy. Acies ordinate* is a deployment of suffering and triumphant militant souls, united in affirming the honor of the Church,  the glory of God and the good of souls. Enrollment is open.